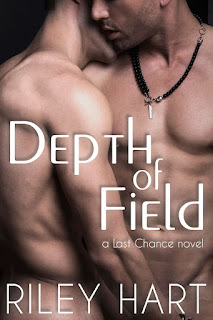 Why'd it take me this long to read this book?! Okay, maybe six months doesn't seem all that long, but goodness, I didn't know what I was missing until I had Riley Hart's Last Chance series starter, Depth of Field, in my hands. This enemies-to-lovers story has angst and then some, but it's the kind of angst that I love--the one that has you wanting to be fully immersed and invested in the main characters and the journey that they're on. There's a lot of history between Shane Wallace and Maxwell Sullivan and every single bit of it was not the good kind. So, how do two men--one a tormentor, the other a victim--find their way to redemption and absolution, and ultimately, love? Shane and Van's tale shows that what we believe to be true may not always so, not until we see the whole picture.

For years, Shane Wallace was the favorite target of Maxwell Sullivan and his best friend. Whether it be bullying him for his sexuality or taunting him about his mother's mental illness, Shane's younger years were marred by what Max put him through. When they were both eighteen, Max disappeared from Last Chance, Oregon, and Shane stayed to take care of his mom. Twelve years later, Shane sees someone he had no desire of ever seeing again. He may have left Last Chance as Max, but Van has changed a great deal over the years. He wants to make amends to the boy who bore the brunt of Van's struggles, but having gone through his own hellish childhood at the hands of his abusive father is no excuse for what Van did to Shane. Amid anger and regret, will they find friendship or more?

Forgiveness isn't always an easy thing to ask for or to give, especially when it involves the kind of bullying that Shane went through at the hands of Van. Hating the latter wouldn't be all that difficult either, not if you're looking at him at face value. However, Van has his own back story, one that shows that the town's golden boy was living a very tarnished life in the house he shared with his parents. See, this wasn't just a love story; this was also a story about families and how the choices we make--or fail to make--can often lead to broken relationships with those who are supposed to be the ones we should be able to count on most: our parents. My heart went out to the boys that Van and Shane once were, and it cheered for the men that they became. Depth of Field easily snags five stars. ♥

Purchase Depth of Field on Amazon.