Review: Down on the Farm by Silvia Violet (Ames Bridge #1) 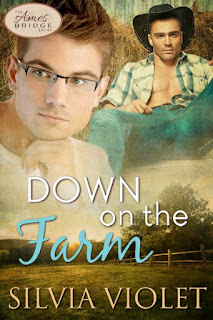 Author Silvia Violet's new series, Ames Bridge, starts off quite well with Down on the Farm. This enemies-to-lovers romance was far from boring, gifting readers with two strong main characters, teacher Beckett Davis and farmer Cal McMurtry, both twenty-eight who were friends as children during the summers Beck would visit his grandmother in Ames Bridge. As they entered their teens, Cal became the jock that hung out with other boys who liked to taunt Beck. With Beck's grandmother's passing, her house and land has passed on to Beck, and while he's still unsure what it is he wants to do with it all, Cal isn't shy about letting his frenemy know that he'll happily take it off his hands. Beck is more than prepared to hate his new neighbor, but he finds himself enjoying getting to know this older and more mature version of Cal. When Beck realizes that Cal is gay and that there's a mutual attraction going on, he's ready and willing to explore it. But what future can they have if Cal doesn't date openly and Beck has no plans of staying in Ames Bridge indefinitely? Will they be willing to fight for the unexpected love they've found?

Down on the Farm was the ideal series starter, giving readers a story while introducing everyone to the town of Ames Bridge and its quirky set of residents, some of whom were quite nosy but well-meaning and a select few who should be banished into some far-off corner where the sun doesn't shine. Beck and Cal were equally engaging main characters, and I was really glad that Cal was so much more than I was expecting him to be. I mean, I know it was mentioned in the blurb that Cal wasn't the same bullying teen he was before, but I've been burned by misleading blurbs and synopses in the past, so forgive me if I'm a teeny tiny tad suspicious at times. I loved getting to know these two guys and how they couldn't resist being together, but only in private, of course, because of certain preconceived notions, some of which were actually well-founded. Special mention needs to go to Katie--Cal's adorable Great Dane who makes it clear she'd choose Beck over Cal--and Irene and Elsie, the dynamic duo to give other dynamic duos a run for their money. Down on the Farm was a fun and endearing read. It gets 4.5 stars. ♥

Purchase Down on the Farm on Amazon.