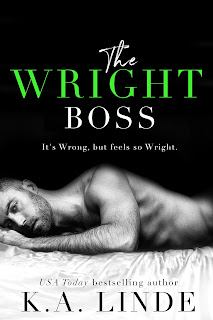 When it comes to office romances, I'm a tad iffy, especially since quite a few of the ones I've read either bordering or jump straight into the realm of sexual harassment. For a superior to put their subordinate in a position that leaves them with little choice but to give into the other's demands or have them throw aside their professionalism and inhibitions doesn't really leave me with a warm, fuzzy feeling nor does it have me swooning for the hero. In the case of The Wright Boss, however, the male main character never pressures his female counterpart. In fact, he goes out of his way to try and make sure that she isn't put in a position where she could lose her job or be looked upon as someone taking advantage of her closeness to him in order to snag a promotion. I loved the first book in this series featuring the Wright siblings, and the second one more than meets the standards set by its predecessor.

Landon Wright is the one Wright brother that chose to not have anything to do with the family business--even though he does have a degree in business--deciding instead to pursue his dream of making a name for himself on the PGA tour. When his golf career is put on hold due to a recurring injury and he over hears something his wife says that makes him believe their marriage had finally reached its end, Landon decides it's time to refocus his energies on something else--including his long-held feelings for Heidi Martin, one of his closest friends and his ex's best friend. You would think there would be some sort of code that would have him hesitating pursuing Heidi, but with his ex and oldest brother getting together and being one step away from divorcing his wife, he's ready to see where his relationship with Heidi can go. But when he becomes Heidi's boss, office politics and ambition are two more things that seem to be piled against them. Can Landon prove that boss or not, he's the Wright man for her?

I confess that I didn't find the Landon on the cover as appealing as the Jensen on book one's cover--I mean book cover Landon looks older than book cover Jensen!--but that apprehension was put to the wayside as I read Landon and Heidi's story. Yes, technically, Landon is still married to his wife when he and Heidi get together and if that's a sticking point and cheating is a trigger, then this is my heads-up. I'm not as bothered as other readers when it comes to cheating--it's fiction, people, and let's be honest, cheating is a very real thing in our world--so I willingly rolled with it. I liked Heidi's ambition and how she held on to her convictions for as long as she did until her heart decided it was time for her to go after her happily-ever-after. Landon was a great guy, whether it be about what happened between his brother and his ex-girlfriend and even with how Heidi pushed him away after everything imploded at work. Again, the family dynamics among the Wright siblings was a favorite thing of mine and with the tidbits about the next couple in the series, I'm sure it'll be one worth reading again. The Wright Boss gets five stars. ♥

Read my reviews for the Wright series:

The Wright Brother (book one) - five stars - My Review