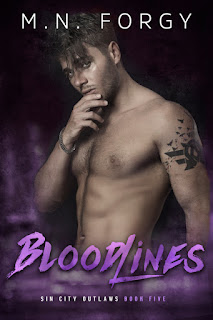 M.N. Forgy is back with her Sin City Outlaws series, releasing Bloodlines, a complex love story between the daughter of a financier of gangs and one of the brothers in the eponymous motorcycle club. Simone Ray grew up by her father's side, knowing full well the kind of business her family engaged in. When she was only eight, she learned that she had been promised to Veer Walsh, the son of a rival family. Their future marriage would be meant to bring the Rays and Walshes together and bring an end to the years-long rivalry. Fifteen years later, the time has come for her to marry Veer, but it's the last thing Simone wants to do. He wants a virginal wife, so Simone decides to do something drastic in hopes of changing her fate; it does--in the most unexpected of ways for her and others.

At the tender age of ten, Rhett Lockhart knew all too well what loss and neglect felt like. His becomes a runaway and is at loss as to how to continue to survive on the streets when he's noticed by the president of a motorcycle club called the Sin City Outlaws and earns the nickname Mac inspired by the laptop he has with him. The MC gives him his shot at a whole new life, but most of all, he finds a family that he knows has his back. A decade and a half later, one of his brothers is killed and Mac is called upon by Zeek Deluca, the club's president, to keep watch over the woman who could be carrying their late brother's unborn child. Playing babysitter to Simone is the last thing Mac wants to do, but before he can stop himself, he starts to fall for both the feisty woman and his brother's baby.

This fifth book in the Sin City Outlaws series started off really well, with peeks into one pivotal moment in both Mac's and Simone's childhoods. I was taken by surprise with how the story played out, especially when it came to what Simone chose to do in order to not have to marry Veer. Her actions that night led to a domino effect and what followed was an interesting and curious love story between Simone and Mac. To be honest, though, the relationship I was most curious about was Kane and Gatz's story, and while I know the outcome isn't a happy one--it was also hinted at in Illicit, the fourth Sin City Outlaws novel--I've got my fingers crossed that it'll still get told in one form or another. Once again, M.N. Forgy's delivers a great read, and that's why I'm giving Bloodlines 4.5 stars. ♥