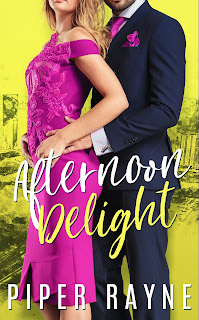 “I never gave up on us. You were the one for me. Always have been and always will be.”

I read this second Charity Case novel--but the third book in the series--in one afternoon, and it was, indeed, a delight. Word play aside, Afternoon Delight was a romantic comedy with a fair bit of angst thrown into the mix. Chelsea Walsh was only eighteen but madly in love with twenty-one-year-old Dean Bennett. Many thought their getting married in Vegas may have been a spur-of-the-moment decision, and those same people may have been tempted to say "I told you so" when Chelsea walked away months later. Fast forward one divorce and five years later, and Chelsea is working for a great charity called RISE, and she's liking her life. The last person she expects to throw a curve ball her way is the charity's new pro bono tax attorney, who just happens to be her ex.

I've read everything that the writing duo of Piper Rayne have released to date, and I must admit that this latest series of theirs is proving to be them at their best, at least in my humble opinion. This second novel was a second-chance story between Chelsea and Dean, and while I've mentioned the basics about them, but trust me when I tell you that there's a heck of a lot more that I've kept to myself. This is the kind of story that demands that you discover the story that these two have to tell as they're sharing it. The reason for their marriage imploding isn't the sort of thing that could be easily swept to the side and both parties consider the slate wiped clean with a simple apology. Dean needs to re-earn Chelsea's trust and respect, but is she ready to forgive him?

I always love how the authors have this ensemble cast of characters that readers are guaranteed to see all throughout the series, and then once they meet and fall in love with "the one", their partners become fixtures as well. Chelsea was a hoot in the first novel, and that feisty side of hers was still present here, but I did like seeing a softer and more vulnerable side, too. Then there was Dean, who was a bit iffy for me in the first couple of chapters he was in, but the guy certainly won me over. He knew what he wanted, and he had no intention of letting anything or anyone get in his way. We also get peeks at the potential next couple in the series, and those two have me itching to read their tale ASAP. Afternoon Delight was a delightful five-plus-starred romance! ♥

Read my reviews for the Charity Case series: