Review: If You Say So by Teagan Hunter 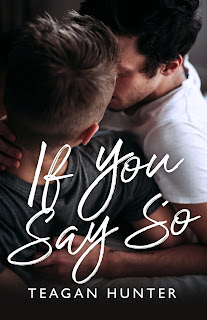 We Are the Stars was my introduction to Teagan Hunter's writing, and it was a new adult (NA) story that I quite liked. When I learned that she was releasing a companion novella--and an M/M romance at that!--there was no question that I was going to read it. If You Say So is a second-chance love story featuring Nate and Blake, who were very much a couple, calling one another "boyfriend" in We Are the Stars. Here, it's been a couple or so months since what Blake, who is gay, thought what was a temporary break ended up becoming a permanent break-up when Nate, who is bisexual, kissed a girl on New Year's. They still live in the same house with their closest friend, but how do two ex-boyfriends who were once the best friends, navigate their way around their non-relationship?

Gah! I totally felt for both Nate and Blake, especially since it was glaringly obvious that these two were still very much in love with one another. Like with other relationships that end, they had a wee bit of miscommunication to blame, but talking about what happened even before the eventual break-up is far easier said than done. There were times where I wished they were real because had they been, I would have insisted that they simply sit down, talk, AND listen. There's some angst and drama as you would expect from two people who are now exes, but the flashbacks to happier times were sweet, as was the notes that Nate left for Blake. As someone who enjoyed We Are the Stars, I also loved seeing Carsen Wheatley and Elliott Mathers. You don't necessarily need to read the aforementioned novella to enjoy this new one, but do so anyway! I'm awarding If You Say 4.5 stars out of five stars. ♥

Purchase If You Say So on Amazon.