Review: Hard Crush by Mira Lyn Kelly (Back to You #1) 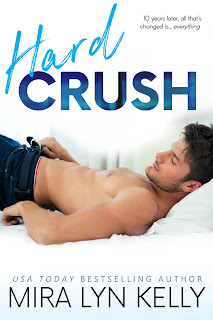 "It doesn't matter whether I'm the guy I was ten years ago or the guy I am today. Neither one of us can let you go."


Mira Lyn Kelly starts off her brand-new series, Back to You, with the second-chance love story between high school sweethearts Hank Wagner and Abby Mitchel. All throughout high school, Hank and Abby were the couple that everyone thought would get the happily-ever-after sort of ending. High school sweethearts who would get married, have a family, and live in their hometown. But when Hank receives a full-ride scholarship to the university of his choice, all the plans they had made were thrown to the wayside. Abby knew that the best thing for them was to simply end things and to walk away. Hank goes on to become a groundbreaking technology whiz, his professional career making him a great deal of money and his personal life becoming fodder for the press. Abby pursues the teaching career she had always wanted in the hometown she never wanted to leave. They've moved on in their ten years apart, but all it takes is seeing each other again during a reunion for them to realize that while some things about them have changed, some remain achingly the same.

Hard Crush is one of those books that surpassed whatever expectations I had for it, and now I find myself with a bit of a book hangover courtesy of Mira Lyn Kelly and Hank and Abby's story. I adored this couple! The connection between them was clearly still there. They may have changed in a lot of ways over the past ten years, but it's obvious that at the very heart of who they are, they're essentially the same people. The problem is, while finding love again is one thing, overcoming their issues is something else entirely. What broke them apart as teenagers is basically the same black cloud that hovers over them now as twenty-eight-year-olds. There's a bit of hemming and hawing at times, especially on Abby's end, but I had a better understanding of why she was the way she was later on in the story. I loved Hank! He felt like such a unique main character, definitely not the usual fare that I've come across this year. Kelly has written the kind of romance I could get behind and created characters worth rooting for. Hard Crush gets five-plus stars and cannot wait for book two! ♥