Review: Reclaim by Christina Lee (Under My Skin #3) 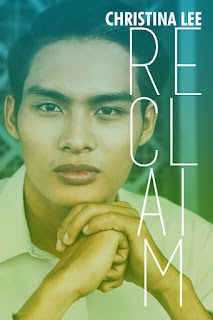 Christina Lee takes readers back to her Under My Skin series with a friends-to-lovers romance. Reclaim is the story of Elijah and Kamnan, best friends since high school and permanent fixtures in each other's lives. When Eli's relationship with his overbearing and controlling boyfriend comes to a not-so-unexpected (but still quite satisfying!) end, he turns to those nearest and dearest to him for support and comfort and heading the friend brigade is none other than Kam. But when Kam has a freak accident during a bike race, it's Elijah who steps up to take care of his best friend. They may have spent a lot of time together and hung out with each other for years, but being in close quarters constantly is beginning to take a toll...in a way neither one of them ever really considered possible. But when Kam's injuries have healed and the outside world begins to encroach, ready to burst the protective bubble they've been in, will reality make them step back from each other? Has Eli gotten over his ex and can Kam give Eli what he needs when Kam's already got a lot going on as a father to Olivia and a business owner?

I know I love me some angst, but even I can make do with just a dash of it in my romance reads, as was the case with this third Under My Skin novel. I appreciated the fact that Elijah and Kam weren't secretly pining away for each other for years. These two had an honest-to-goodness platonic relationship since they were teenagers and it felt like transitioning from friends to lovers came at just the right time. I liked that Kam had Asian roots because while he isn't the first one I've come across in my M/M reads, it's not as commonplace as you'd think, so kudos to the author for the representation outside of the usual. I also happen to have a thing for stories that involve single parents finding love and the added bonus here is that Elijah already had an established relationship with Kam's five-year-old precocious daughter, Olivia. Like I mentioned earlier, this doesn't have a whole lot of angst-ridden drama-rama, but there were certainly moments that tugged at my heartstrings. Christina Lee once again delivers with this five-starred read, and now that bonus scene at the end of Reclaim has me on wishful thinking overdrive! ♥

Read my reviews for the Under My Skin series: