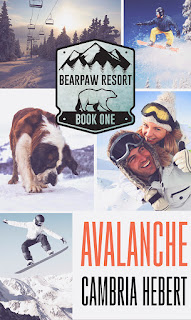 Avalanche isn't just the first novel in the Cambria Hebert-penned BearPaw Resort series, but it also happens to be my introduction to the author's writing. Yup, you read that right. This was my first ever Cambria Hebert read. Having caught my attention with her Hashtag and GearShark series, I'd been meaning to go through her back list, especially since she's received a lot of positive reviews on Goodreads. But with so many ARCs already on my plate, previously published books have had to take a backseat. But lo and behold, I learned that Hebert had a new series in the works and that there were events slated for the series starter, so voila! Here I am, having happily popped my Hebert cherry, and now, I finally realize what I've been missing, and I get why countless readers and bloggers love her books as much as they do. I'll surely have to put in the time to read her older stuff, but now, on to my review!

The BearPaw Resort series kicks off with a second-chance love story between Bellamy Cutler and Liam Mattison. Eight years after first love ended with first heartbreak, Liam is surprised to come face-to-face with the girl who held a firm grip on his heart when they were younger. A former professional snowboarder whose career ended due to injury, Liam is back at his family-owned resort as an instructor. He isn't quite sure what to make of Bellamy being back, but this time around, he refuses to let go of Bellamy as easily as he once did before. He's prepared to fight for her. The problem is, Bellamy is on the run from her past, and it's a past that involves witnessing a horrendous crime that forced her to enter witness protection. Unfortunately, those looking for her know all about her, which is why Bellamy is back in the place that's always meant most to her, but for how long can she and Liam remain safe?

If this is how the rest of the series is going to be, then rest assured that each book is going to land on my to-be-read list. There's a hint of suspense, which I'm always a fan of, and adding it to the romance between two people who obviously still love one another made this an even better read than it already was. I could have easily given this five-plus stars, but that's something I often hesitate to do when it comes to series starters, mostly because I prefer playing it safe and not getting overly excited. Hebert's writing is on-point and she's given readers both a story that holds our attention for the long haul and two main characters who you want to cheer on from start to finish. There are also a few supporting characters that I really hope will be getting their own stories told as the series progresses. Whatever may come next, I'll definitely be reading the second one. Avalanche receives five stars. ♥