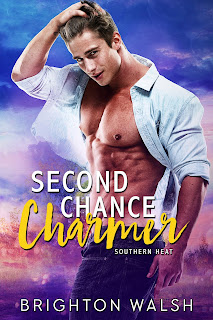 Brighton Walsh launches her new small-town romance series, Southern Heat, with a second-chance romance entitled Second Chance Charmer. When he was nineteen, Finn Thomas was absolutely in love with seventeen-year-old Willow Haven. This was the girl all his dreams were built upon, but maybe those dreams were too lofty for someone like him--someone deemed unworthy by some. Left with no other alternative but to leave Havenbrook and the girl he loved, Finn disappeared with his mother and brother in tow and his heart broken beyond repair. It would take ten years for him to return, and this time, Finn intends to stay and fight for and be with his Willowtree.

Devastated, Willow had no choice but to move on after Finn left, and five years after she graduated from college, she's dedicated herself to bringing her hometown back to life. It also involves constantly feeling as if she's falling short of whatever it is her family and the town expect from her. The one person who loved her for who she was left a decade ago...but then, out of the blue, she spies a familiar face around town. Finn has returned and he's looking to open the very first bar Havenbrook has ever had. Not everyone is thrilled by Finn being back nor about his plans for a bar, but there's no denying that having her first love in town is going to make life interesting again for Willow.

Prior to reading Second Chance Charmer, I had only read one story from Brighton Walsh, My Strongest Weakness, and it was part of the multi-authored '90s Playlist anthology and my favorite in the collection. Reading a full-length novel penned by Walsh was a highly enjoyable and satisfying experience. Clearly, I've been missing out on the books on her back list if I had to base it on this new series starter of hers. Finn and Willow's second-chance love story was a great mix of lighthearted romance with humor and a dash of angst to keep things interesting, plus the pacing was perfect and the cast of characters memorable. Need I say more? Five stars for Second Chance Charmer. ♥