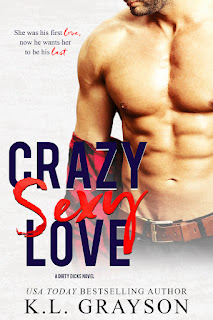 There are a few moments in my life that have left me breathless—falling off a bull for the first time in competition, getting kicked by a bull, the day Mo broke my heart, and subsequently, the moment she stole every piece of it back.

Crazy Sexy Love is the first novel in bestselling author K.L. Grayson's brand-new series, Dirty Dicks, and it was one hell of a ride. This second-chance romance has champion bull rider Rhett Allen returning home after he's saddled with a grade three concussion and other injuries during a bonus run. When he learns that his beloved dogs are at a shelter while he's recuperating, he decides to go get them but is surprised when he sees exactly who it is that's taking care of them--the only girl to ever lay claim over his heart and the same one that broke it, Monroe Gallagher--his Mo. Only she hasn't been his Mo for the past six years. When he left to become a professional bull rider, she had her sights set on getting her degree in veterinary medicine. So what is she doing at the shelter her family owns instead of her father? Rhett has no clue, but there's no denying that she still affects him like no other.

Whatever plans Mo had for herself changed forever when her father suffered a stroke. She once dreamed of becoming a veterinarian and being by Rhett's side as he pursued his bull riding career and they created a home and family together. Six years after everything fell apart, Mo comes face to face with the one boy who could both make and break her future. She wants one more chance with Rhett, to prove to him that in spite of everything that's happened, they still belong together. There are only two men she's loved--her father and Rhett, both of whom appear to be going in directions away from her. Mo wants her father to be happy, and the last the she wants is to stop Rhett from pursuing his career, but could fear get in the way of everything finally going right in her life? And when push comes to shove, will Rhett have to choose between bull riding and the woman he's always loved?

Gah! This book was such a surprise! It didn't go in the well-worn direction that I had expected it to, and for that, the author certainly deserves high praise. Grayson took her main characters on their own unique journey to happily-ever-after and it evoked a myriad of thoughts and emotions out of me. Rhett and Mo were young and in love and they certainly had dreams that involved spending the rest of their lives together, but they also fell victim to their emotions, leading to misunderstandings and wrong assumptions. For six years, they led different lives from what they once had hoped for themselves as a couple, but I'd like to think that those years made them stronger and allowed them to see the world without the rose-colored glasses of young love. Aside from their second-chance romance, this was also about family and the power of love and forgiveness. Crazy Sexy Love receives five-plus stars. ♥