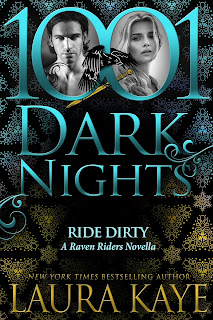 Ride Dirty is the final (gulp!) book in the Raven Riders motorcycle club romance series from bestselling author Laura Kaye. The series did kick-off with a spin-off novella from the Hard Ink series, so maybe it's apt that it ends with another novella, but I do have my fingers crossed that we'll get a couple (or more!) novellas out of the series because there are several more brothers in the club that did make their mark with readers and fans of the series. Based on a poll created by Kaye, the brother chosen to get his happily-ever-after is none other than Caine McKinnon, who, admittedly, I didn't vote for. The MC's thirty-one-year-old Sergeant-at-Arms is partnered with twenty-seven-year-old kindergarten teacher Emma Kerry, and it proves to be a powerful pairing.

Caine's a man of few words, and if he could get away with it, he would choose to remain silent. He doesn't let people get too close, preferring to have the feeling of family that he gets from the Raven Riders MC while not engaging into anything too deep. Hooking up is enough to keep him satisfied sexually--men, women, couples, who he was with didn't matter as much as filling a temporary need without getting overly intimate. Getting attached cost him once before, especially since he couldn't be what was required of him back then. And then he rescues Emma and her dog Chewy from a mugging, and with the perpetrator getting away, Caine makes himself Emma's protector. He plans to keep watch from a distance, but Emma's determined to bridge their gap.

Oh my. Caine is, hands down, one of the most memorable male main characters Laura Kaye has given her readers. He has a brokenness to him that calls to me, that makes me want to empathize with him. His story is heartrending, and I think he truly did need someone with as light a spirit and as open a heart as Emma to make him realize that he was worthy of love and that there was a reason he had a second chance at life. The villain in the story was easy to pinpoint because of the attention that was given to him in the text, but the manner in which he was neutralized surprised me in the best way possible. The author deserves kudos for her touches of bisexuality and female empowerment alongside the series arc of love and brotherhood made this novella an even more potent and amazing read. Raven Riders is one of Kaye's best and Ride Dirty easily garners five stars. ♥