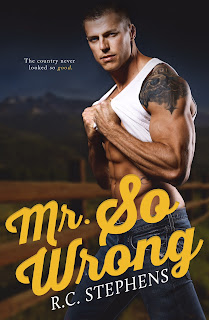 I enjoyed R.C. Stephens's Mr. All Wrong, and was looking forward to reading the follow-up, Mr. So Wrong, which is about Albert Walsh III and Samantha Belmont, aka Al and Sam. There was a point in their lives wherein they had plans to make and promises to fulfill. Years later, neither one is finding much fulfillment in the current statuses their lives are in. Hoping to find himself, Al ventures to his sister's place but his car ends up in a ditch. He's soon rescued by Sam. On the surface, Al and Sam do not seem to have a great deal in common, but the more time they spend together and the more they explore their unexpected attraction to one another, the clearer it becomes that they share more similarities than differences. But will these two get it totally so wrong before they get it so right?

I wasn't a fan of Al's in Mr. All Wrong, although getting to know him better in Mr. So Wrong definitely helped to make me see him in a better light, even if it was a wee bit slow-going. Sam, on the other hand, was difficult to get a firm hold on. On paper, she was the typical sort of female main character that I could get behind, but somehow, she left me cold. There were times I struggled with the book, especially given that Sam seemed to spend more time pushing Al away, and Al was like a dog with a bone who refused to be dissuaded from going after what and who he wanted. I had high hopes for this follow-up because I liked Colton Mathis and Evie Harper's story, but it didn't quite meet my expectations for it, even if Al proved to be a pleasant surprise. Mr. So Wrong gets 3.5 stars. ♥

Purchase Mr. So Wrong on Amazon.