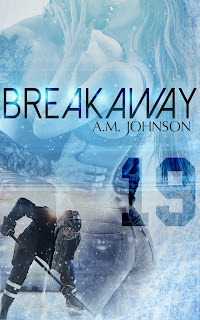 I pressed my teeth into my bottom lip, my smile shy as he watched me. "It was a good kiss."

"Good?" He raised his eyebrows, his smile pulling into sexy dimples.

Mark eliminated any remaining distance between us, leaning in, his breath tickled my overheated skin as he whispered into my ear, "That kiss was fucking epic."

Breakaway is my fifth read from A.M. Johnson, and so far, she's par for the course in terms of impressing me with her writing. She veers into sports romance territory with her new Rule Book series, and unsurprisingly, she's done the sub-genre of hockey romance justice. I've read my fair share of hockey romances--and yes, admittedly majority of those were M/M--and Johnson's new series starter ranks quite highly all-around and the highest on my list of M/F ones. Not only does the author give one hell of an enjoyable and engaging story focused on her main characters, Mark Carmelo and Stevie West, but readers are introduced to a number of memorable supporting characters that deserve to get their own happily-ever-afters as the series moves forward.

When Mark Carmelo and Stevie West first met, there was an undeniable attraction thrumming between them. But Stevie was married to her husband of thirteen years, and Mark walked away, both of them left with what-ifs and what-could-have-beens. One year later, twenty-six-year-old Mark sees thirty-three-year-old Stevie once again, this time around, she's divorced and that connection between them all those months ago is as present as ever. Their relationship quickly develops, but Mark is a man who knows all too well what it's like to have one's trust broken and Stevie is completely at a loss as to what it's like to be with someone as well-known as Mark. When their pasts test the fledgling love they share and no breakaway in sight, will they break free or hold tight?

I love that Mark and Stevie were NOT perfect main characters. These two were flawed from the get-go but they were, at their very core, good people. Between the two of them, it was Mark who had difficulty when it came to fully trusting what they had, no thanks to his last committed relationship. It would be easy to say that Stevie being older made her more levelheaded, but age rarely has anything to do with such things. She was more patient and understanding when it came to certain challenges that came their way, while Mark tended to go all in when it came to almost anything. But at the end of the day, they simply worked. I was behind them all the way, not only because they were perfect for each other, but also because they did deserve to end up together.

There's angst in this story, but nothing overly heavy. There was one particular point in the book that I felt my heart clench painfully in my chest for Stevie, but there was nothing too depressing about either one's history or circumstances. I would definitely count these two as one of my favorite fictional couples of the year, but they were also aptly surrounded by a good cast of supporting characters, the most memorable ones being Mark's teammates--namely, Bryson Jensen and Mike Carlsson, team captain and goalie, respectively--and Stevie's best friend, Reagan, and Stevie's boss, Trent. Whether these characters do or do not end up getting a book in the series, I'm already hooked and looking forward to perusing whatever's up next. Five-plus stars for Breakaway! ♥