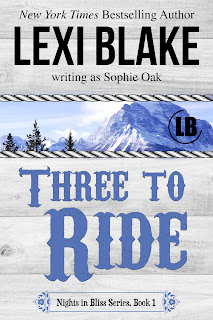 Lexi Blake, writing as Sophie Oak, reboots her previously released Three to Ride, the first book in her Nights in Bliss, Colorado series. This second edition has additional content, including two new chapters. Readers aren't just introduced to the trio of main characters--Rachel Swift and identical twin brothers Max and Ryan Harper--but also to the very unique town of Bliss, Colorado, which makes it a great series starter because we meet side characters that catch our attention. No one in Bliss bats an eyelash over the fact that Max and Rye--a horse trainer and the town sheriff, respectively, who live on the family-owned ranch--share women and want to be in a committed relationship with one woman. But there's no one in Bliss that they see themselves settling down with. That is, until Rachel comes along, and this time around, it isn't charming and easygoing Rye that pursues the woman they want, but the far more broody and quiet Max. But Max is afraid that his and Rye's preference to share women will scare Rachel off, but will it be too late to tell her the truth when her past comes calling and threatens their safe haven?

Okay, I confess that I was a wee bit confused when I first came across this book because I thought it was part of the author's other re-released series, Texas Sirens. Obviously, I got that cleared up pretty quickly, and even though both the Texas Sirens and Nights in Bliss, Colorado series are about three-sided love stories, Max, Rye, and Rachel's is different from that of Jack, Sam, and Abby Barnes-Fleetwood in the first two Texas Sirens books. There's more of a romantic suspense feel to Three to Ride, thanks in large part to Rachel's history and how she found her way to Bliss. Another interesting aspect to this story had to do with Max and Rye having always been involved with the same woman in one relationship, but how Max decided to step away from that when Rachel came along. Now, why he felt the need to do that is part and parcel of what makes the dynamic between the twins fascinating, and why, in the end, there was this balance that was created when Rachel became involved. I liked how they managed to figure out how truly come together as a throuple, and look forward to the next one! Four stars for Three to Ride. ♥