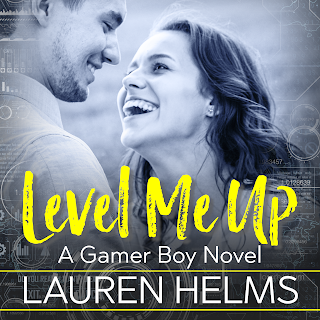 Note: This audiobook was provided by the author via Barclay Publicity in exchange for an honest review.

It's been a full twenty-four hours since I listened to Level Me Up because I wanted to take some time to gather my thoughts before writing this review. Let me say that it's never easy to type out on my keyboard how a book, regardless of its format, failed to click with me. Unfortunately, that's where I find myself with this first in Lauren Helms's Gamer Boy series. I've read and listened to quite a few romances wherein one or both of the main characters happen to be involved in the gaming world. Now, one doesn't have to be a gamer to have an appreciation for gaming as a whole or the individuals who immerse themselves in it. I'm not a gamer, but I get the fascination people have for it and why there are so many who get so into it. I even know a few of them personally.

Helms's story had potential. If it didn't, I wouldn't have bothered to spend almost six hours listening to it. But this was a case of potential not being full met. Main characters Morgan Lawson and Dex Roberts were okay, although the latter had far more charm to him than the former, but I didn't feel as much chemistry as I would have wanted between these two. And goodness, there's only so much insecurity I can take from a female main character, especially since the guy who loved her wasn't giving her any reason to doubt him. I honestly didn't even get why they clicked as much as they were supposed to have clicked. I also felt as if I was waiting for something to happen story-wise, but it was like a weighted pause that led to not much after all. As far as the narration is concerned, I Lacey Gilleran, who is a new-to-me narrator, was good enough. All things considered, Level Me Up gets three stars. ♥

Purchase Level Me Up on Audible | iTunes.