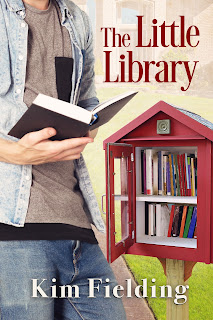 It's been almost two years since I read my first Kim Fielding title, and I'm glad I'm getting the opportunity to read something of hers again. The Little Library isn't even close to the Fielding book I read in July of 2016 in terms of story line, but I like it when an author is able to give me something different from whatever I had previously read from them, and Kielding gives me that with her newest release. In this standalone, we meet thirty-six-year-old college professor Elliott Thompson, who's moved to Modesto in order to start over after an illicit years-long relationship ended with his now ex-boyfriend landing in prison. Though the only thing he's guilty of is becoming involved with someone he should have steered clear of--someone who insisted they keep their relationship secret--finding a job to keep his professional and scholarly pursuits on track is difficult. Then he meets injured cop Simon Odisho. Alongside spending time with Simon, Elliott's neighborhood library and his unexpected new dog Ishtar have him genuinely happy. But how long can it last when Simon is still in the closet about his sexuality to his family and when someone in the neighborhood isn't happy about Elliott's little library?

There was no way I was going to miss out on reading a book that had one of the main characters starting a neighborhood mini library on his front lawn, and I'm glad that I stuck it out even though the story did get off to a bit of a slow start. Elliott and Simon don't seem to have a whole lot in common, but their paths do literally cross at a point in their lives where they're both feeling rather restless--Elliott due to his difficulty in finding a job that makes him feel fulfilled and Simon due to his getting shot in the line of duty. Getting together gives both men something important to think about in terms of commitment, being true to oneself, and planting roots in a community. I love how this become a love story that wasn't limited to just the romantic kind between two people. There was a lot of love AND acceptance to go around, whether it be within a family or between friends or among your neighbors. Oh, and let's not forget love for a pet because Ishtar was a bit of a furry scene-stealer. I know what it's like to have a dog and how having them around brings more attention your way than you'd ever realized was possible. The Little Library gets 4.5 stars and I resolve to read more Kim Fielding! ♥