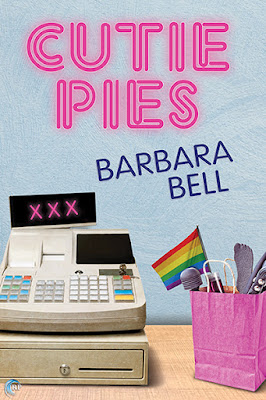 About Cutie Pies
Joey works at Cutie Pies, the smallest adult store in Sydney. After his parents kicked him out years ago, the haphazard shop became his home away from home and is the only place where he can embrace his queer, quirky, and—okay—sometimes a little awkward self.

Joey can’t stop thinking about him, and Mick’s continued visits to the store make him even harder to forget. Mick is shy and sweet, but also secretive and uncertain. As the two grow closer together, Joey starts to wonder what Mick really wants from him, and whether he can risk falling in love with someone who might not be free to love him back.

A Note from Barbara Bell
Hi, I’m Barbara Bell, romance author extraordinaire, and welcome to the blog tour for my debut novella Cutie Pies! Over this past week I travelled the internet sharing some thoughts on my book. Follow along and join the discussion!

A Guest Post from Barbara Bell
Cute, Quirky, and Queer - The Inspiration for Cutie Pies

But, if I was to point to one catalyst – one thing that really made me want to sit down and tell the story of two people meeting and falling in love in an adult store – then it was a woman. She was British, never wore anything that wasn’t either rainbow or black, and had the bluest eyes I’ve ever seen on a person. She was also my date for the 2017 Mardi Gras Fair Day. We spent the day being doused in glitter, stuck in bathroom stalls, and visiting the local sex shops.

It was great. We talked about our experiences and our preferences. We talked about what we would like to try and balked a little at some of the other things on sale. We decided orange is the best colour for a vibrator, that strap-ons that looked like knickers were sexy but likely ineffectual, and debated the value of lube brand recognition. But, more than anything else, we just joked around and had fun… and that is what inspired Cutie Pies. That feeling I got hanging out in a sex shop with someone who I was hoping would one day be more than just a date.

Joey and Mick (the heroes of Cutie Pies) are very different people to me and the woman I went on that date with, but the feeling is the same. It happy, it’s hopeful, but it’s also a little bit uncertain. It’s cute, it’s quirky, and it most certainly is queer.

It’s what inspired me to write Cutie Pies and while my relationship with this woman might not have worked out (she unfortunately had to go back to the UK) I am really glad we had that time together and that it inspired my first published novella.

I’ve always believed life is made up of moments and that was certainly a moment.

I can only hope I captured some of that feeling in the novella itself.

But, that is up to the readers to decide! I am really looking forward to the release of this novella so I can see what everyone thinks and really start diving into details and discussing the finished product with anyone who wants to contact me about it. Interacting with people is something writers don’t get to do a lot of, so I’m really excited for that opportunity.

Follow along with the rest of the book tour to find out more about it, myself, and my thoughts on writing. Don’t forget to leave your contact information to go into the draw to win an ecopy of the book.

About Barbara Bell
Barbara Bell grew up on a sheep farm in rural Australia, moved to Brisbane when she was nineteen to study film, and now lives in Sydney with an ever changing cast of housemates and a colony of bees.

She is an avid traveller, a proud geek, and loves telling stories about human relationships and how strange and silly (but also beautiful) they can be. She began writing when she was eleven years old and believes it's probably too late to break the habit now.

Giveaway
To celebrate this release, one lucky winner will receive a copy of Cutie Pies! Leave a comment with your contact info to enter the contest. Entries close at midnight, Eastern time, on March 24, 2018. Contest is NOT restricted to U.S. entries.