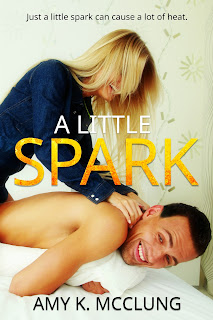 A Little Spark is my first Amy K. McClung and touts to employ one of my favorite tropes, enemies to lovers, although Samuel Warner and Jillian Hartford don't really start off as enemies nor is the "hate" mutual. Sam is a real estate agent who co-owns his company alongside his brother, who just happens to be marrying Jillian's estranged best friend from college. When Jillian is brought in as a last-minute replacement to someone in the entourage who couldn't make it, she finds herself partnered with Sam, her former best friend's future brother-in-law, who recognizes Jillian as the woman he couldn't help but notice the night before. There's a spark between the two of them, but each time their paths cross, they either get into an argument or Jillian distances herself from Sam. She can't deny the fact that she's attracted to him, and it's obvious that he's attracted to her, but Jillian is slow to trust even though Sam himself knows what it's like to have his trust betrayed. But sometimes, all it takes is a willingness to have that spark to catch fire and know that even when you have been burned once, wounds can heal over time.

This contemporary romance got off to a pretty strong start, and there was a definite spark between the main characters that I looked forward to seeing further explored. There were lulls, however, at certain points in the story, so my attention had to be brought back to focus every now and again because, I confess, it did wander. As far as the main characters are concerned, Sam and Jill had some definite moments wherein I felt myself fully immersed in who they were and what their respective back stories were and where they were headed as a couple. At times, that spark flared, but just like with the story, there were times it nearly petered out. By the time I got to the second half of the book, things progressed far more quickly and the story became more interesting. There were certain supporting characters who I felt definitely stole the spotlight because I found myself wondering what their story was and I was more focused on them than on the main characters themselves. I liked more about A Little Spark than I disliked--and if there was a book about Stephan the neighbor I would read it--so it gets 3.5 stars. ♥