Review: For Crosby by J. Nathan 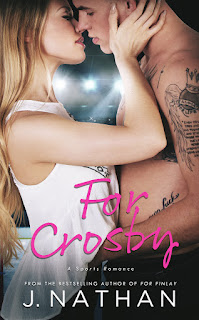 As we approached the first turn, he squeezed my hand. I figured he was keeping me from falling, but then he spoke softly. “Thanks.”

I gave him a sidelong glance as I struggled not to fall on my butt. “For what?”


Ah, I cannot get enough of J. Nathan's writing! I adore her new adult (NA) romances, and the latest addition to her For You sports romance series carries with it the same wonderful balance of sweet and steamy and sports and romance. For Crosby moves from the football field to the ice hockey rink, with twenty-one-year-old senior Crosby Parks, who's transferred mid-semester from Texas to Alabama and has become the captain of his hockey team, something most of his teammates aren't thrilled about. When he's tied naked to a tree by several of them as part of their hazing--which isn't allowed by the administration--he hopes to find help in the form of college junior Sabrina Marshall, who just happened to be passing by. Irritation and indignation get in the way of any rescue efort, and they become adversaries. Crosby is cocky and unapologetic about his bad behavior, while Sabrina is none too happy that she can't seem to act indifferently towards this guy as easily as she does with almost everyone else. What'll it take for Mr. Hockey and the Ice Queen to thaw the icy wall between to see the real Crosby and Sabrina?

If you've read the first two novels in the series, For Finlay and For Forester, then Sabrina should be a familiar character, given that she just happens to be Finlay Thatcher's best friend in school and the girl Trace Forester used to date. I'm glad she finally got her happily-ever-after in For Crosby, and she and Crosby definitely made it an entertaining ride to that happy ending of theirs. From the moment these two met while Crosby was tied to a tree, there were sparks and those sparks never once died down. I love when a couple I'm reading about have that electricity between them, and these two lived up to every single expectation I had for their enemies-to-lovers story. Yes, there's no denying that Crosby was an ass towards Sabrina in the first few chapters of the book, but we do get a better understanding of why he seems to have such a resistance to getting close with anyone, choosing instead to push them away with his less than pleasant persona. Of course, he's met his match in Sabrina because the girl wasn't a pushover and when the two did become close, she was willing to fight dirty if need be for Crosby.

One of my favorite things about Nathan's stories is that they've always got a dose of angst to them, and me being the angst addict that I am, well, I tend to look for that one aspect in the books I read. I think that they give stories grit to them, and that's exactly what the author has given us in her newest release. Crosby and Sabrina may not seem to live extremely complicated lives, but remember that they're college students, and Crosby is dealing with something that not even the strongest of worldly individuals can often handle with grace and aplomb. Aside from these two main characters, though, I'd also like to make note of the usual suspects, a.k.a. recurring characters. Finlay and her boyfriend, Caden Brooks, have a pretty strong presence, while Forester does make a couple of cameos. Then there's Grady--and I'm not sure whether that's his first or last name--who definitely intrigued me here more than ever before. Fingers crossed that he gets his book next because the guy deserves to find someone who'll knock his world of its axis. For now, I'm highly recommending that you give For Crosby a shot. Five-plus stars. ♥

Read my reviews for the For You series:

For Finlay (book one) - five-plus stars - My Review

For Crosby (book three) - five-plus stars - My Review (posted above)