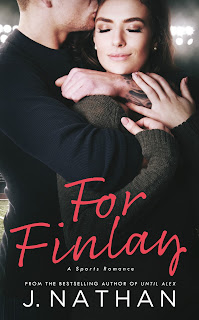 Note: This ARC was provided by Weapenry Co-Op via NetGalley in exchange for an honest review.

I've read--and loved--the first three novels J. Nathan wrote, but this one...this is, hands down, my favorite so far. The author's fourth standalone novel, For Finlay, is a new adult (NA) sports romance set in college football-loving Alabama. It's the story of twenty-year-old college freshman and football team water girl Finlay Thatcher and twenty-one-year-old college junior and quarterback Caden Brooks. She may treat him with clear disdain, leading to him to keep his own distance from her. Then she hands him a piece of advice regarding his ball throwing skills, and when said advice proves to help him out, Caden becomes even more curious about the girl whose name isn't all that known by the players on the team. Once he learns that she's Finlay, she becomes more ingrained in his mind.

There's something about Finlay that entices Caden to pay closer attention, to want to know who she really is beneath the prickly exterior. The combination of her gorgeousness, her no-nonsense attitude, and her love for and knowledge of football has Caden enthralled. But he's got a girlfriend and Caden has always prided himself on not cheating. And then there's the fact that he and Finlay are tied in a way that he isn't aware of. You see, it isn't on the football field that their paths first crossed; it was two years ago, at a point in Finlay's life where she lost the one person who was truly her other half, the same person who she tried to break away from, pushing him away with very little care. When he learns the truth, will he be left feeling like a fool or will he prove his love true for Finlay?

I loved this story. It was angsty but it also had hope and humor along with the prerequisite romance and sex. Finlay and Caden carry their tales--as individuals and as a couple--very well on their shoulders, and both prove to be wonderfully easy to relate to. They have their own share of personal issues, the bulk of which are family-related. Finlay lost her twin brother Cole just as he was beginning to make his dreams come true in college, and Caden was a witness to the effect his father's betrayal had on his mother. I won't say what the direct connection between Finlay and Caden is because it'll spoil the read for those of you who have yet to pick up the back. It'll be mentioned early on, so it's not as if you'll be left waiting for what feels like forever before some grand revelation is put in play.

There isn't some sort of immediate bolt of attraction between Caden and Finlay and I actually liked that. It was different. They're like magnets that repel each other, and so they have to build up to a friendship before it becomes even more. Finlay was such a great female main character. She made no apologies for who she was, but my heart broke for her because she was still mourning the loss of Cole. Caden, on the other hand, was cocky but there was more to him than just being a jock with a promising future as a pro footballer. There's one particular point in the story that I was brought to tears be! Words can hurt but they can also heal. I'm highly recommending you read For Finlay, a story about family, forgiveness, football, falling in love, and moving forward. Five-plus stars. ♥