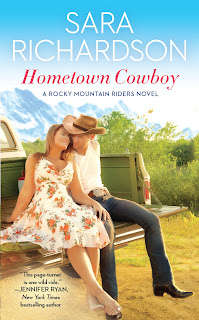 I loved author Sara Richardson's Heart of the Rockies series so when I heard she had a new series, Rocky Mountain Riders, launching in 2017, adding it to my to-be-read list was a no-brainer. With this new series, still set in Colorado, readers are introduced to the Cortez brothers--Lance, Lucas, and Levi--and four female friends--Jessa Love (daughter of the best friend of the Cortez patriarch, Luis), Naomi Sullivan (Lucas's ex-girlfriend), Cassidy Greer (sister to Levi's friend who passed away), and Darla Michelson. Hometown Cowboy is Lance and Jessa's story and while they know full well who the other is and what they do--Lance is a bull riding champion and following closely in his legendary father's footsteps and Jessa runs an animal rescue as part of her late father's legacy--they don't exactly have any sort of relationship with each other, connected more through their respective fathers' friendship.

From the moment his mother left their family when he was only fourteen and his younger brothers were ten and seven, Lance took on the brunt of responsibility when it came to Lucas and Levi. Sixteen years later, he looks back on their fractured family and the kind of life that's waiting for him once he decides to retire from the rodeo circuit. He knows he has one more good ride within him and he's training hard to prove to the naysayers that he's still got what it takes. But when his father goes missing, he heads over to Jessa Love, hoping that she'll know where her favorite volunteer and father figure went off to. When Lance catches Jessa half-naked, he finally takes notice. They're clearly attracted to one another, but with Luis Cortez's health becoming a cause for concern and an unexpected Cortez family reunion, plus their opposing views on love and commitment, is there any hope for them?

Lance and Jessa's love story was a lighthearted, angsty feel to it. It took a bit longer than I was expecting to be convinced that these two had something more substantial than lustful intentions (more on Lance's end than Jessa's), but I did like how it was a slow burn romance. Even as there were people pushing for them to explore whatever was going on between them, there was a naysayer or two as well, particularly Naomi Sullivan, who was one of Jessa's closest friends as well as being close to the Cortez family, not only because of her past relationship with Lucas but because she worked on the family ranch. Then you've got Jessa's other friends and Lance's family freely giving their opinions and unsolicited advice. Whenever Lance and Jessa were together, though, I did feel their connection and it did become more believable as the story progressed and as their new relationship evolved.

However, I must confess that it was the family drama going on in the Cortez family that had my full attention. I felt terrible for Lucas, the middle brother, and I'm super curious as to how he and Naomi are going to push past those years of separation. Speaking of years, I was a bit confused. It's been sixteen years since their mother left and it was seven years into that when everything went to hell. That means it's been about nine years since Lucas and Naomi's relationship ended and they were in high school at the time, but Naomi's daughter is ten years old. So yeah, I wasn't sure if my math was off, but it just didn't add up in terms of numbers because Naomi married Lucas's best friend within the nine-year time frame. I've also got a niggling thought in my head about these two, but I'll wait for book two to confirm if my suspicions are correct. For now, I'm happily giving Hometown Cowboy 4.5 stars. ♥