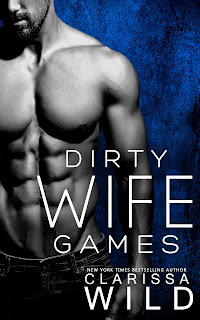 Mindfuckery is alive and well in the second book in the Indecent Games series from bestselling author Clarissa Wild. Book one, Wicked Bride Games, pushed the envelope when it came to the sexual elements, but while Dirty Wife Games may be more tame on that particular point, it throws you for a loop when everything is revealed in the fourth part of the story. We're lured into this strange love story between a wife who's left her abusive husband and a stalker whose intentions towards here are either romantic or downright creepy...or maybe a unique mix of both.

Hyun Song may have broken her contract with Max Marino (from the first book), leaving behind the very wicked games he and his brothers engaged in with her and eight other women, but the life she went back to was about to change drastically when her parents decided to marry her off to a man Hyun despised being with. Even as she tries to start over, she feels like she's being watched. It isn't just every move she makes; she feels as if whoever's watching is staring right into her own soul. Is it Hyun's estranged husband or could it be possibly be someone else?

This is one of those reviews that I'm not going to be detailed about. I've given the basics to give you an idea what the story is about, but you NEED to read the book in order to totally get why I made the whole "mindfuckery" comment at the beginning. I've read both books in the series, but I feel like you can absolutely read this second book on its own (although the first book is actually a good read as well). The romantic eroticism and mystery suspense are trademark Clarissa Wild, making Dirty Bride Games both expected and a surprise. This gets five stars. ♥

Read my reviews for the Indecent Games series: