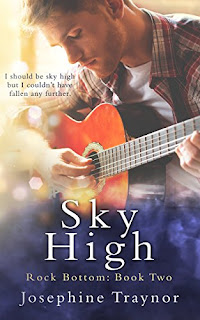 
Sky High is the second book in the Josephine Traynor-penned Rock Bottom series but it can be read as a standalone. The story starts off with seventeen-year-old Baxter Riddle's inner monologue which basically had him begging to not be paired with the girl who hasn't said a word nor made eye contact with anyone else in school--Lily Maltree. The fates, however, are against him...or maybe not, especially since Lily has an unmistakable gift for writing lyrics, and with Baxter creating the music, they've come up with a song for their project. But then Lily disappears and Baxter knows he would never sing that song with anyone other than the mysterious, talented girl.

Fast forward a decade later, and Baxter is one of the most famous musicians around, but he also happens to have had a messy history with addiction. Now trying to push forward with his career minus the drugs he was once hooked on, the last thing Baxter expects is to cross paths once again with Lily. She's a bestselling author writing under a pseudonym, and just like before, Baxter is fascinated with her and feels their connection. But Lily is wary about being under the public spotlight, and being with someone like Baxter puts her right in its crosshairs, what more her own issues when it comes to addiction, and not in the way you may think. Will their story finally flourish?

This novel definitely hit more of a high note with me than it's predecessor, although I did have a couple of issues with the writing itself. There were times wherein the characters would be talking and you'd have no clue what they were talking about it until it's belatedly pointed out outside of conversation. The other one had to do with a whole lot more than necessary going on close to the end of the book, which also saw the appearance of Reece and Madelyn Ashton from the first novel. And then what followed that was somewhat anticlimactic. But like I mentioned earlier, this was one step above Rock Bottom, which is why I'm giving Sky High 3.5 stars out of five stars. ♥