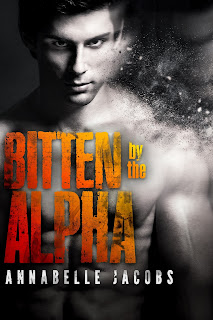 I know that I declared the third novel in the Regent's Park Pack series as my favorite, but I'm going to have to amend that because I do believe it's just been usurped by this fourth and latest book! Annabelle Jacobs has me absolutely addicted to this shifter romance series of hers--and as a side note, may I point out how absolutely fabulous each of the covers are, especially when they're side by side--and I'm so glad that the alpha of the pack, Cameron Harley, FINALLY gets his shot at having what his betas and closest friends have. If you're familiar with the series, you'll know that Cam fell madly in love with his wife Mia, who was a human, but then she was killed during the pack wars a decade ago. Since then, Cam's closed his heart off to even the notion of falling in love again, declaring he could never give his heart to anyone because it already belonged to his late wife. This is a fact that everyone in his pack knows, most especially his most sensitive beta, Gareth Parks, who's been in love with his alpha for years. Choices will need to be made and loyalties are tested. Will the alpha and his beta make it through?

Gaaaaah! I loved Cam and Gareth! The whole idea of an alpha and his beta sharing a possible bond was intriguing to me because of the dynamics involved. I didn't see what sort of challenges they would be forced to face if they did complete the bond until it was explained here, and that just made for an even more intriguing read. Who do you put first--your mate or your pack? One of my favorite things about their story was how the other shifters who already found their mates and completed their own bonds in the first three books were able to provide some much-needed advice to these two. It wasn't just that they understood the ups and downs of two individuals mating, but also the complexities of an alpha and a beta becoming bonded plus how Cam was hesitating because of his late wife and how painful it must be for Gareth. I also liked how one particular issue in the third book was finally resolved here. It was fitting considering everything that had happened before. I'm not entirely sure if this is the end of the Regent's Park Pack series; if it is, what a fitting end Bitten by the Alpha was. This receives five stars. ♥

Read my reviews for the Regent's Park Pack series:

Bitten by Mistake (book one) - four stars - My Review

Purchase Bitten by the Alpha on Amazon.