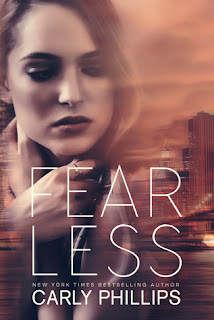 Fearless is the first book in the bestselling author Carly Phillips's new Rosewood Bay series, and it's the story of a young woman who's limited her interactions with the outside world, choosing the solitude of her beachside cottage, and the young man who once rescued her from bullies when they were teenagers and who could rescue her once again from the humdrum that her life has become. Kane Harmon owns his own garage and likes working with cars, and while he may be single, he keeps a watchful eye over his gambling addicted father and his beloved older sister who happens to be a single mother. He's wary about getting into any sort of romantic entanglement with the wealthy women who come to Rosewood Bay, knowing full well that they see being with someone like him as nothing more than a very temporary thing. But Halley Ward seems to be the exception. Yes, she's wealthy, but Kane still sees the same girl who seemed to be afraid to get past her self-imposed boundaries. There's something about her that calls to Kane, and if Halley chooses to be fearless, entrusting her heart to Kane could be worth it all.

It's been a while since I've read a Carly Phillips that I loved as much as I did Fearless. Kane and Halley's story was the kind of read that was both heartbreaking yet hopeful. I say heartbreaking because of the issues that Kane and his sister Andrea had with their father and his gambling addiction and Halley's own issues with her estranged mother and the money that her family has plus those that came about during her time in foster care. The hopeful part comes in because when these two came together, it wasn't this immediate joining of hearts and souls, but more of a steady quest on Kane's part to win Halley's trust in order to prove to her that he was worth taking a chance on. There was nothing rushed about this story, and with all the insta-love quickies out there, I truly appreciate a nicely fleshed out love story that involves more effort on both parties to truly make their relationship work. There are also a number of side characters that I'm hoping we'll get to know even better as the series progresses, so that they, too, find their way to their happily-ever-after. I'm giving Fearless five stars out of five stars. ♥