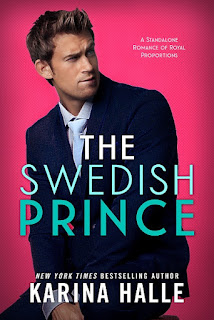 "Always more, never less. You are the always more and you...you fucking astound me."

The Swedish Prince is a modern fairy tale that opens with twenty-two-year-old NYU journalism scholar Margaret McPherson in New York whose main worries were school and work. Fast forward a year later and Maggie is back in her hometown of Tehachapi, California taking care of her five younger siblings after a horrific event. She's had to set aside her dreams of becoming a journalist in order to be their guardian, which is why she now works at a local hotel as a maid. When she crosses paths with one of the guests, she's taken aback by Korkort Sverige, who just happens to be the very specimen of male gorgeousness. But is Korkort who he really says he is or is he Johan Andersson? What secrets could he be keeping and what happens when she discovers he's none other than Sweden's Crown Prince Viktor from the Royal House of Nordin? Maggie may be charmed by her Swedish prince, but can she afford to pin her heart, her family, and all of her hopes on an ending that only happens in fairy tales? With all the tragedies both Maggie and Viktor have experienced, could they finally live happily ever after together?

I love old movies, and Roman Holiday is a definite favorite, what with a true-blue princess falling in love with a newspaper reporter. This film classic that won Audrey Hepburn her Academy Award and had even more women fall in love with Gregory Peck is great inspiration for romance authors who want to dip their toe in the royal romance genre. The key word, of course, being "inspiration". The last thing I want is to be reading a book that's too close to the story that movie tells. Had another author attempted to do this, my wariness would be anywhere from a wee bit to a hell of a whole lot. But this is Karina Halle we're talking about here, and as my own experience reading her books has taught me, Halle doesn't do anything half-baked. So, while her new standalone may have been inspired by Roman Holiday, The Swedish Prince is very much Karina Halle-esque in all the best ways possible. This novel is a gem of a romantic comedy read, one that makes you believe that fairy tales DO come true and may even happen to someone like me and you. I'm highly recommending you read The Swedish Prince. Five-plus stars! ♥

Purchase The Swedish Prince on Amazon.