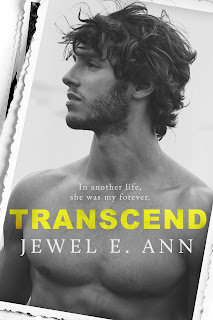 Ah, I do love me a Jewel E. Ann-penned novel, and Transcend, the first in her duet by the same title, isn't just a new novel, but it tells a tale that's different from anything else the author's published so far. We first meet Swayze Samuels when she's eleven and sitting in the waiting room with her parents at a doctor's office. Pretty soon, it's clear that Swayze isn't your run-of-the-mill preteen. As a matter, there's always been something different about here--something extraordinary, and her true purpose doesn't reveal itself until a decade later. She takes a job as the nanny to the baby of thirty-six-year-old single father, widower, and professor Nathaniel Hunt. Swayze and Nate have never met before, yet she seems to know things about him that no one else should...no one except his best friend, Morgan Daisy Gallagher, the same best friend he named his infant daughter after. Soon, the connection between Swayze and Nate is entangled with his past and her present, one that also involves her boyfriend, Griffin Calloway. Could this be a love story that transcends time...and death?

I had to look back at my previous paragraph to see if I gave anything away by comparing it to the blurb for the book, and whew! It looks like I kept that as spoiler-free as possible, because see, not only are spoilers called as such for a reason--i.e. they may spoil the book for anyone who has yet to read it--but also because this is a book that needs to be experienced as bits and pieces of information are rolled out. You'll then you want to be able to figure it out on your own and see where it goes from whatever snippet you may have picked up on through the blurb. Suffice it to say that life for the main characters in this book was already complicated to begin with, but having their lives intertwined once they meet adds an extra complication that isn't easily explained. Jewel E. Ann has always managed to surprise the heck out of me with her originality and creativity and she's done it once again with this thought-provoking read. Transcend had me contemplating an age-old question regarding fate and destiny and true love, and even if it does end in a cliffhanger, it still gets five stars. ♥