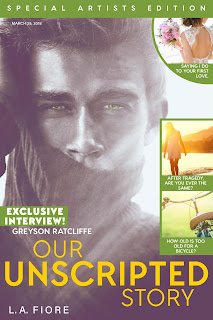 Holy shit, that kiss. I found myself daydreaming about it and I didn't daydream. And it wasn't just because it was the best fucking kiss, it was the familiarity that hooked into me and refused to let go. I knew her and yet we'd never met before this. I was going mad, but there was comfort knowing Alexis was right there with me.


L.A. Fiore isn't a new author; she is, however, new to me. Yes, you read that right. I'd never read anything by her until I had the opportunity to review her latest standalone, Our Unscripted Story. I have no idea how consistent of an author she is, although she's clearly a favorite with many a reader if I based it solely on the countless rave reviews I've skimmed through on Goodreads. However, if this book is any indication of what I've been missing not having read her past work, then I certainly deserve to be knocked upside the head because this author has an undeniable gift when it comes to weaving a love story that could very well become a modern-day romance classic.

Our Unscripted Story is a love story that's told over the span of two decades. Fiore introduces her readers to Alexis Owens, whose idyllic childhood was changed forever when she lost her parents at two. Taken in by a couple that was more foster monsters than foster parents, Alexis didn't allow her circumstances to get her down, creating a family of her own with the Cantenelli twins, Dylan and Dominic, and their parents. As she hit her teens, that family would grow ever so slightly to include Paige and Grant. She didn't have a great deal and she would forever miss her parents, but her world was turning and all was good. And then it got better when she saw Grayson Ratcliffe sitting on her jetty, the one that she considered exclusively hers. One look at him, and she simply knew--he was it for her.

But like all love stories, Alexis and Grayson's had its complications. Oh, these two were young and in love, and as far as they were concerned, they knew who they wanted to spend forever with during their time together, even though less than a year doesn't seem all that long to some. Dreams would lead them in different directions, and while their paths would cross over the years, it takes more than twenty years for them to find and fight their way to a much deserved happily-ever-after. Oh yes, this ends in one hell of a happy ending, but Alexis and Grayson's story shows that even the truest and purest kind of love doesn't come with any guarantees, and sometimes, it does require a combination of fate and work. I don't want to give too much away, so I'm going to end this review with two suggestions: read Our Unscripted Story as soon as possible and do have tissues on-hand. Five-plus stars. ♥


I pulled his mouth to mine and kissed him with everything I was feeling. His fingers dug into my thighs to lift my hips. I broke the kiss when he pulled me onto his cock, filling me so completely. More tears, I had missed this. Our eyes locked as we moved, it had been a long time but our bodies remembered. We moved in sync reaching for that peak and when we came, it was together.