Review: Wrong Side of Heaven by Gia Riley (Broken Wings #1) 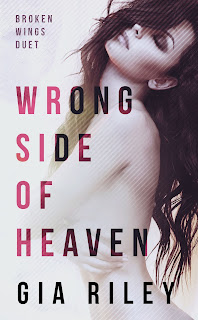 Wrong Side of Heaven is my first Gia Riley read, and it also happens to be the first in her Broken Wings duet, with the conclusion set for release three weeks from now. Basically, that means that this does first book does end in a cliffhanger, and fair warning, it's a doozy of a cliffy. I know it's only a three-week wait, but gah! I desperately need answers and all the resolutions that the author can throw my way regarding this intoxicatingly intriguing romance.

Okay, here's the gist of this duet starter: Seventeen-year-old Winnie's beloved father passes away, leaving her in the not-so-capable hands of his girlfriend, Tess. There are two male figures who try to be what she needs most--seventeen-year-old Jasper who's been crushing on his classmate Winnie and thirty-four-year-old Trey, who was her late father's best friend and is beginning to see Winnie in ways that he knows he shouldn't. Which one will save her from hell?

Told from three different points-of-view, Wrong Side of Heaven is a tantalizing tale with a hint of taboo. Winnie is caught between a rock and a hard place, yet she refuses to feel victimized by her circumstances. She's the kind of main character that you want to see persevere and overcome the challenges that are before her, although I admit that there were moments I had difficulty connecting with her. Still, she's someone that readers can so get behind.

We have two guys who have strong feelings for Winnie. Jasper may be the same age as her, but she's known Trey longer. Maybe the appeal of the forbidden is one she finds more tempting than the notion of being with someone who's learning the proverbial ropes of pending adulthood at the same time she is. Wrong Side of Heaven leaves us with a slew of unanswered questions, but I have a feeling Riley will make the wait worthwhile. It gets four stars. ♥

Purchase Wrong Side of Heaven on Amazon.