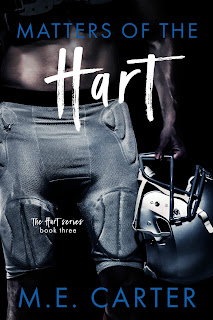 Somehow in all of this, I fell for him. In heads-over-heels-let-me-have-your-babies love with him. I would never tell him how I feel. At least not now. There's still too much shit in my brain to make me a good girlfriend. But I'm hopeful that someday I'll heal more. Until then, I'll accept the comfort of his friendship. Because if he turned me away now, I'm not sure how I'd react. He's too much of the rock in my life right now.

I'm sure that's not exactly the makings of a healthy relationship, but it's working, so I don't care.

This book should have come with a warning that tissues were needed because I so wasn't expecting it to go in the direction it did! If you've read M.E. Carter's first two books in her Hart series, which is the very series that brought her to the attention of many a reader, then Jaxon Hart should be a more than familiar name. Well, he's all grown up now. At twenty and a junior in college, Jax is dealing with certain realities in his life, one of the most important being what he perceives as his adoptive dad's disappointment in him not following in none other than Jason Hart's much lauded football playing footsteps. Sure, Jax loves playing the game, but he's realistic enough to know that there's no future for him as a player in the professional league. He wants to forge his own future, but doing so could further erode his relationship with his football great dad. But all that his worries about that take a backseat when Jax comes upon a young woman being assaulted outside the club he works at. And from that very moment, Jax's life and that of sophomore Annika Leander become intertwined, as what happens with matters of the heart.

Matters of the Hart is able to stand apart from the first two novels in the series--Change of Hart and Hart to Heart--and it does an excellent job doing so. Jax and Annika's love story is wholly different from that of Jax's parents, Jason and Addison, but does share that heartrending feel to it. Annika and Jax's story, particularly how they met, is one that I think shouldn't be called "timely" simply because there have been a number of high-profile cases regarding assault and harassment. These crimes against women--and yes, I know very well that it doesn't just happen to women, but I'm focusing on that for the purposes of this review--happen all too often, without any sort of qualification other than the fact that the victims tend to be female. I appreciated that the author highlighted the fact that when these crimes do occur, it affects more than just the primary victims. It touches those who become their heroes and their support system as well, as was the case with Jax. Matters of the Hart was, indeed, a love story, but it was also a life story about resilience, courage, and the bonds of friendship and family. Five-plus stars. ♥

Purchase Matters of the Hart on Amazon | B&N | iBooks | Kobo.