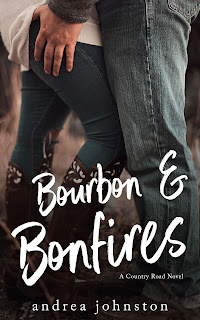 I do believe I've come across my favorite book in Andrea Johnston's Country Road series! Bourbon & Bonfires is the fifth release and the fourth full-length novel in the aforementioned collection of books set in the town of Lexington. If you were able to read the novella that came before this newest release--entitled Champagne & Forever--you'll remember that Landon Montgomery briefly met Addison Sinclair, older sister of Taylor, owner of the Country Road, the bar that Landon and his best friends all hang out at. Months later, Addy decides to move closer to her brother, wanting a stronger support system around her after her fourteen-year-old son Mason gets into trouble once again. She certainly isn't getting much help from her ex-husband who moved to California. Starting over at nearly forty, the last thing Addy expects is to find herself captured the attention once again of thirty-year-old Landon. She thinks she's too old for him, but Landon's isn't interested in any other woman but her. He treats her with care and respect and becomes a mentor to Mason. Landon's the perfect guy...but is he perfect for Addy?

I absolutely adored this book! It was a combination of the May-December trope flipped to have an older woman and a younger man and the same with the single parent angle. I loved Addison and her determination to do whatever was necessary in order for her son to have a much better life after his father basically abandoned him. She wasn't expecting to start anything with any guy, but then Landon isn't necessarily just "any" guy. Not only is he the lone single member within his circle of friends, but his mother is determined for him to settle down and start a family of his own. These two may not have immediately seemed like they would be a love match, but gah! From the moment these two met in the novella, there was a hint of something, and now here in their own novel, that something has equated to chemistry and the kind of connection that leads to great banter, wonderful romance, and steamy intimacy. It was also nice catching up with the first three couples in the series, and we're clued in as to whose story will be up next and it looks like it's going to be a heartrending one! Five stars for Bourbon & Bonfires. ♥