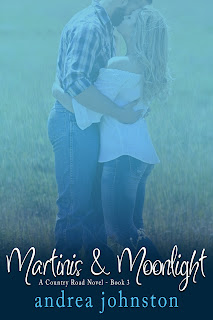 I liked, I loved, and now, I neither liked nor loved. Andrea Johnston's Country Road series started off well with Whiskey & Honey, which was the story of Bentley Sullivan and Piper Lawrence, and it reached a high with Tequila & Tailgates, which was all about Jameson Strauss and Ashton Sullivan. I had been looking forward to the release of the third novel in the series, Martinis & Moonlight. Unfortunately, Owen Butler and Minnesota Walker's tale fell short of what I was hoping for. The connection was nowhere to be found for at least half of the book, and by the time I began believing that maybe Owen and Minnie had the stirrings of chemistry that I require out of the couples I read about, I had about had it with Owen's treatment of Minnie and Minnie's repeated acceptance of this asshat.

Moving to Lexington in order to take care of her sister's children was a no-brainer for Minnie Walker. She wanted to be there for those that mattered most to her, even if it meant taking an extended leave from work and breaking up with her boyfriend of three years. She easily finds a job at a construction firm, and she immediately takes a liking to her new boss. Unfortunately, she isn't quite sure what to make of Owen Butler. There's no denying the man is good-looking, but he also happens to be a shameless flirt and has no qualms flirting up a storm with Minnie, much to her annoyance. Neither one of them is looking for a relationship, so maybe it's just right that they keep things firmly platonic. However, what they share is starting to feel like something Owen's not ready to accept.

The story was slow-going, and there was A LOT of steps forward and leaps back, especially on Owen's end. I wasn't a fan of his constant denial to Minnie of any knowledge of his bad behavior, even as he would quietly admit to himself and then later apologize for being a jerk. I really wanted to like him, but he wasn't giving me any reason to. There were also my issue with this book supposedly being a standalone but there were parts of it that would have left me scratching my head in confusion had I not read the first two novels, i.e. Jameson's strange behavior at work and Felicity Remington-Thorne's vitriol. There was just such a disconnect for a good portion of the book in terms of the story and the main characters and Owen simply didn't win me over, so, Martinis & Moonlight gets three stars. ♥