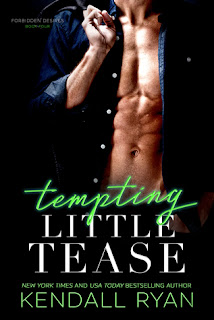 Kendall Ryan's not-so-little series is back with its fourth installment, not counting the prologue novella. Yes, Ryan's Forbidden Desires series is spotlighting the eldest of the Kingsley brothers, thirty-eight-year-old Quinn. His book, Tempting Little Tease, has him paired up with his Italian language tutor who just happens to be sixteen years his junior. At twenty-two and fresh out of college, Alessandra (whose last name I can't recall being mentioned) is set to pursue her dream of having a life in Italy. She's got her one-way ticket ready and has three weeks left of being a nanny and tutoring those who want to learn Italian. When Quinn's regular tutor suffers a heart attack, it's Alessandra who's sent in his place. From the minute the two see each other, there's a hum of attraction surrounding them. But if the age difference doesn't get to them, could the fact that she's leaving for what could be forever end what has the potential to becoming the most important romantic relationship either has ever had?

This book definitely ranks second in the Forbidden Desires series, thanks to a couple of great main characters and a story that was surprisingly low on angst. I liked that Alessandra wasn't some shy violet waiting to be plucked by the more experienced Quinn. She made it clear from the get-go that the attraction was reciprocated and she didn't shy away from it. While I wouldn't call this a case of insta-love, things do progress rather quickly between the two. Of course, we also get cameo appearances from Quinn's younger brothers, Gavin and Cooper, and their respective significant others, plus there's an important revelation made in the latter half of the book that I'm guessing will lead into the final book in the series. My only quibbles regarding Tempting Little Tease would be the lack of a surname for Alessandra (I'm just a stickler for this sort of thing) and a bit more development within their relationship before things progressed to the level that they did by the last chapter. I'm giving this one 4.5 stars. ♥