Review: Shacking Up by Helena Hunting 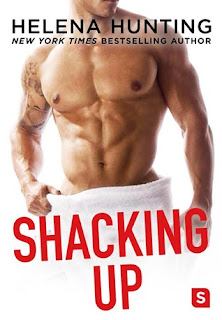 Anyone who tells you a kiss is "just" a kiss certainly has never received the kind that can change your life. Just ask Ruby Scott. One hot kiss--followed immediately by one not-so-hot cough--and Ruby finds herself sick. It wouldn't be so bad had she not had an audition that was supposed the one that would snag her the must-have role she believes will change her fortunes. She could always ask her father for help financially, but Ruby wants to be independent and do this on her own and not have to rely on her family's money. With her about to lose her apartment thanks to months of owed rent, her best friend steps in and presents her with a unique opportunity to earn money AND have a place to live in the meantime. All Ruby has to do is be a sitter for a bunch of exotic pets belonging to Bancroft Mills, a wealthy hotelier who turns out to be Ruby's Awesome Kisser and disease spreader. When Bane realizes what the aftermath of that kiss cost Ruby, he offers a solution: become his live-in pet-sitter for as long as she needs a place to stay. Who would've thought shacking up would shake things up for Ruby and Bane?

As always, bestselling author Helena Hunting has served up a novel that more than satisfies. Shacking Up is a change of pace from Hunting's tattoo artists from her Clipped Wings series and the hockey players of her Pucked books. Of course, with every new direction a go-to author takes, there's that mix of anticipation and anxiety because, naturally, expectations are high. Thankfully, this particular author repays the faith her readers have put in her because she, once again, gives us a couple that warms our hearts as they go from their meet-cute of an awesome kiss that leads to one of them getting sick to becoming housemates and then friends and then the inevitable "more". The comedy is ever-present but it feels different from the kind you may have gotten used to in her earlier series, and that isn't necessarily a bad thing. There's a bit more subtlety here, with a dash more with mixed in with Hunting's brand of humor. The romance is not to be missed and for anyone who loves a well-written slow-burner, Shacking Up could very well more than tickle your fiction-loving fancy. I'm giving this five of five stars. ♥