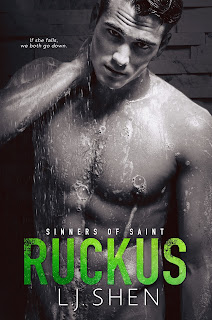 “Like you?” My face twisted in abhorrence, spitting the words like they were revolting. Her eyes widened. I shook my head, a dark chuckle on my lips. “You think I fucking like you? Are you kidding me here? I don't like you. I love you. Even that's an under-fucking-statement. I live for you. I breathe for you. I will die for you. It. Has. Always. Been. You.”


I swear to God, just when I think the previous HotHole I read about was my favorite, the newest one comes along and BAM! The drooling commences and the latest HotHole who takes center stage knocks down whoever came before a peg or two. That is exactly what happened when Dean Cole came along to tell his story, and it's a deceptive one. You think all you're getting is a second chance romance with a hint of taboo in it, but then you remember that this is an L.J. Shen-penned story and that her characters are anything but typical. Ruckus is every bit the stunning read that Defy and Vicious were--and I'm sure that Scandalous will be--but just like the prequel novella of Jaime Followhill and Melody Greene and the full-length novel of Baron Spencer and Emilia LeBlanc, Dean Cole and Rosie LeBlanc's tale is its own unicorn: extraordinary, fabulous, seductive, and downright addictive.

Rosie LeBlanc has always loved Dean Cole, even when she knew she shouldn't. He was, after all, her older sister's ex-boyfriend. She pushed him towards Millie, and in doing so, broke her own heart. What she didn't quite realize eleven years ago was that the boy nicknamed Ruckus did, indeed, want a LeBlanc...except it wasn't the LeBlanc who was his girlfriend. Dean wanted the girl he called Baby LeBlanc, but he stayed by Millie's side until she cut and run and left him behind because her heart already belonged to one of his closest friends. More than ten years after that break-up, Dean has decided he's waited long enough. It's time for him to make Rosie see what he's known all along--that she's the LeBlanc who should have always been by his side. They've already wasted too much time being apart, but with her being on borrowed time, could it possibly be too late for Dean and Rosie to be together?

This so didn't play out the way I thought it would and that's just one of the reasons I love this novel as much as I do. Dean and Rosie's story began eleven years ago, so thank goodness for flashbacks because those allowed me to have an even greater appreciation for what Rosie was pretending didn't exist and what Dean insisted has been avoided for far too long. I get why Rosie thought having feelings for her sister's ex wasn't a good thing, but if you know what went down between Dean and Millie and among Dean, Millie, and Vicious, then you'll understand why Dean begged to differ with Rosie's position. Personally, I didn't consider Dean and Rosie's relationship taboo; Dean and Millie were a couple for several months but that ended and Millie was now engaged to Vicious. But Rosie's love for her sister knew no bounds and I could relate, so I did appreciate where Rosie and Dean were coming from.

I lost count of the number of bookmarks and notes I made while reading this book. There was so much more to Dean and Rosie, and I loved getting to know both of them. There were a couple of times that I had tears in my eyes because of what they had to face together as a couple, but goodness, these two had a love so strong that it could do battle with almost anything--including Dean's unresolved issues with his past and Rosie's cystic fibrosis. Dean and Rosie were inevitable, and their story had me weepy, smirky, and smiley--though not necessarily all at the same time. Bonus points for having the other Jamie and Mel and Vic and Millie there as well, plus we get an idea who Trent Rexroth may be paired with. These four guys may have been hot when they were eighteen, but they're hotter at thirty...and beyond. I'm so loving my pack of Todos Santos unicorns! Five-plus-stars times ten for Ruckus. ♥