Review: Something About You by Riley Hart (Saint & Lucky #1) 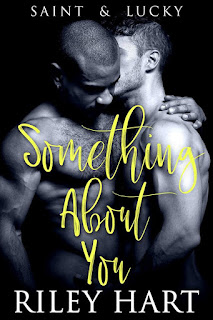 Twenty-four-year-old Lucky Tyler Holloway knows how lucky he is. He and his mother survived his birth and he has parents who love him, siblings who support him, and a doting grandmother who has declared him her favorite. He's got a roof over his head and a good job that pays the bills. He's the golden boy in his small hometown, only wanting those he cares about most to be happy--which is why he decides to take matters into his own hands and gets in touch with his grandmother's best friend's estranged grandson. Tyler hopes for the best, but when he doesn't hear back, he chalks it up to a case of good riddance to bad rubbish. So imagine his surprise when he shows up. He immediately dislikes the big city guy, so why can't he stop thinking about him?

Thirty-two-year-old public relations executive Grayson St. Claire was suspicious when he learned that he had a grandmother he knew nothing about, but curiosity and the need to know why his father kept her existence secret has him driving down from Los Angeles, California to Cottage Grove, Virginia. His only intention was to connect with the only family he has left, but Saint can't deny that his curiosity regarding the hot country boy is getting the better of him. Saint doesn't hide his bisexuality, so maybe he can teach Tyler--whom he prefers to call Lucky--a thing or two about embracing his own bisexuality. Both men know that this a temporary thing. Saint's life is in LA and Tyler's is in Cottage Grove; but there's something about this that makes the want more.

Riley Hart is one of those authors who's become an auto-read for me. More often than not, there's a hint of angst to her stories that calls to me, what with me being the unapologetic angst addict that I am. With her latest standalone, Something About You, we've got the country versus city thing going on. Lucky (aka Tyler) and Saint don't have a whole lot in common. The former lives a far simpler life with family close at hand, all while staying in the closet about his sexuality; the latter, on the other hand, makes no apologies over the fact that he's more adventurous when it comes to his hook-ups, all while achieving a great deal of success in his career. But somehow, it's those differences in their lives that open their eyes--and hearts--to what they've been missing.

These two didn't particularly like one another in the beginning, so we've got a bit of enemies-to-lovers going on as well. I did like how these two clicked once they allowed the beginnings of friendship and something more to take root. Aside from their romance, I liked the story angle concerning family for both of them. Lucky feared his family wouldn't accept him once they learned of his sexuality, while Saint had to deal with his own feelings once he learned what caused the rift within his family. This had a good set of supporting characters--from their respective grandmothers to Lucky's family and best friend. There are cameo appearances by familiar faces from a Riley Hart series. Read Something About You to see who and get a sweet and sexy love story as well! 4.5 stars. ♥

Purchase Something About You on Amazon.