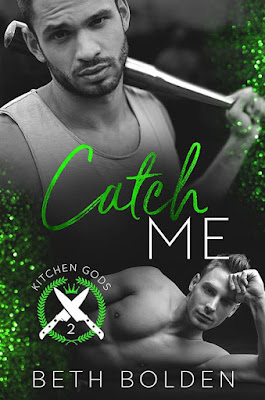 About Catch Me
Chef Wyatt Blake is finally ready to move on from his thankless job. He gets no wiggle room, zero praise, plenty of abuse, and on a good day, he might only spend twelve hours in the Terroir kitchens. A friend of his recommends a private chef position, but despite the boost in pay, Wyatt doesn’t want to babysit some spoiled, rich LA family.

Imagine his shock when the family isn't a Kardashian clone, but Ryan Flores, the only professional baseball player to ever come out of the closet.

Ryan is also at a career crossroads. His team’s management wants to see his more responsible side, which means no more late night hookups and no more adrenaline-charged stunts. When his agent suggests he find a fake boyfriend to give him an air of domesticity, he’s only reluctantly interested.

Until Ryan goes to a local bar and spies the cute private chef he’s supposed to be interviewing the next day. Maybe a quieter life wouldn’t be so bad, as long as Wyatt is part of it?

Wyatt believes Ryan could be more than just a crappy boss, but he isn't sure about leaving the kitchen for the life of a professional boyfriend. Especially when he wants the reality so much more than the fantasy. 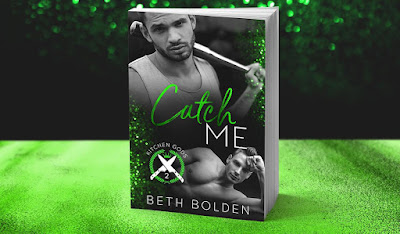 Read my four-starred review of Catch Me.

Add Catch Me on Goodreads. 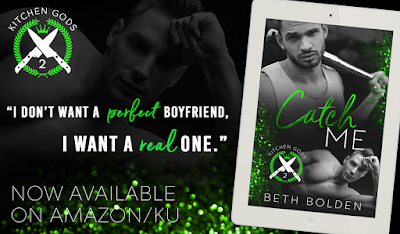 An Excerpt from Catch Me
And he was the epitome of the California boy, Ryan thought as he watched Wyatt carrying his board towards the sand. Blond hair bright under the sun, the tall lanky build, all that tanned skin rippling with muscle.

Ryan hadn’t thought there was a place he could look better than naked in his bed, but he was surprised to discover that he’d been wrong.

There was something in the quicksilver of Wyatt’s smile as he turned to make sure Ryan was still following him. It made Ryan want more from him than just the admittedly mind-blowing sex they had had, which was something he’d thought he’d left behind years ago.

He thought about texting Tabitha and telling her she might be right, but she was already insufferable enough. Besides, if he didn’t tell her, he didn’t put it into words and the truth, while eye-opening, was also fucking terrifying.

“You coming?” Wyatt turned back fully this time, gracing Ryan not only with a quick glimpse of his bright smile, but his entire self. He looked worried, and Ryan wondered how long he’d been spacing out. Not something he usually did—and he’d already spent the morning doing it.

“Sorry,” Ryan apologized. “I was distracted by such a fantastic view.”

Ryan snorted. “Not the view I was talking about.”

“We gonna surf?” Wyatt asked as they set up their little camp over by one of the piers.

Ryan had tossed the wax over to Wyatt a few minutes before, and had been fidgeting with his tow strap since. He’d wanted to come out here and let the sun and the sand and the waves exorcise his bad mood, but now he wasn’t sure he even wanted to go in the water.

He wanted to sit on the sand and look at the sunlight on Wyatt’s hair, and ask him to tell him more about culinary school and Chicago and Terroir. Even about that nutjob Aquino.

Ryan was not used to wanting to pick social interaction over the adrenaline rush. It was weird, and he wasn’t sure he liked it.

“We’re here, aren’t we?” Ryan asked, shooting Wyatt a disbelieving look, even though all the hesitation had been on his end. He wasn’t ready to admit to anyone—never mind Wyatt—that he’d been contemplating something so out of character. “Last in the water buys burgers on the way home.” 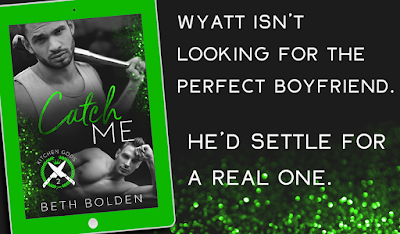 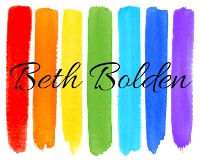 Beth Bolden lives in Portland, Oregon with her supportive husband. She wholly believes in Keeping Portland Weird, but wishes she didn’t have to make the yearly pilgrimage up to Seattle to watch her Boston Red Sox play baseball. She’s a fan of fandoms, and spends too much of her free time on tumblr.

Beth has been writing practically since she learned the alphabet. Unfortunately, her first foray into novel writing, titled Big Bear with Sparkly Earrings, wasn’t a bestseller, but hope springs eternal. She’s published eight novels and two novellas, with Catch Me, the next novel in the Kitchen Gods series, releasing in June 2018. 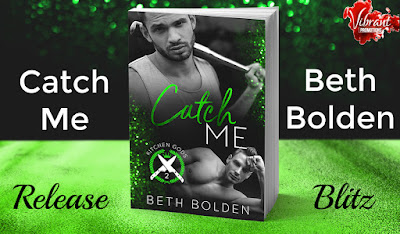