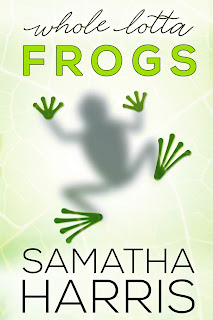 Samatha Harris is a new-to-me author and Whole Lotta Frogs is the romantic comedy standalone which introduces me to her writing. This book has an enemies-to-lovers slash second chance romance feel to it, with a woman who knows what it's like to have to go through one proverbial frog after another when it comes to dating. Lennox Brooks isn't even looking for a prince; she just wants a man worthy of her. Maybe she's just a magnet for the frog variety. After all, the first boy she loved turned out to be the first one to ever break her heart. Ellis Walker was, quite literally, the boy next door. They were friends who ended up hanging out with two different social circles in high school. He went from buddy to tormentor, but it was when he stood her up for prom that cemented him in the annals of history as King Toad. Now he's back, and he seems to be EVERYWHERE. He seems to think that there's a friendship for them to rekindle, but Lennox doesn't mind reminding him just how much she'd rather have him as far away from her as possible. What she didn't count on is Ellis preparing to show Lennox see he's no frog.

This is one of those books that made me feel one way for most of the story and then something magical happens and my feelings go from super frustrated to super fascinated. I wasn't much of a fan of Lennox's nor Ellis's, no thanks to the really childish behavior these two seemed to have set as a default whenever they were around each other. She was bitchy towards him for the most part and she chose to hold on to a grudge from years ago rather than to sit down, talk about it with him, and then move on. On the other hand, he was like the grown-up version of the boy who liked to poke at the girl he crushed on, and when I say "poke", I don't mean it in a playfully sexual way. So, yeah, there was quite a bit of eye-rolling on my end, especially when it came to Lennox. I also think she treated Sawyer Bennett abhorrently, and I hoping the guy gets his own book because if anyone deserves a happily-ever-after, it's him. Then something clicked--these two got their act together. I was happy they were happy. All things considered, Whole Lotta Frogs did leave me with a smile on my face, so this garners an average rating of four stars. ♥