Review: Save the Date by Carrie Aarons 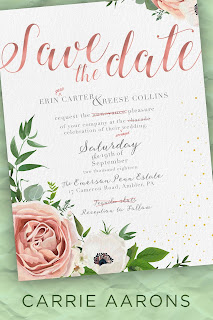 With every new release from Carrie Aarons, the more confident I am in the decision I made to put her on my go-to list of romantic comedy authors. In her latest published novel, Save the Date, Aarons gives readers the story of two single best friends, journalist and fashion blogger Erin Carter and NICU nurse Reese Collins, nearing their respective thirtieth birthdays. This wouldn't seem that big of a deal but these besties made a pact when they were fifteen: if they were both single by the time they turned thirty, they would marry each other. Erin's never taken that fifteen-year-old pinky promise of theirs seriously, but with Reese moving back to Philadelphia, it looks like he's intent on making good on it. His persistence is slowly knocking down Erin's defenses, but Erin's faith in love is non-existent, fearful of getting hurt. However, her reticence may end up hurting someone else entirely: her best friend.

I adore friends-to-lovers stories because of the evolution from one kind of relationship that has love and trust to another kind of relationship that demands the presence of those same two things. Reese and Erin had such an easygoing friendship to begin with. I loved the banter and teasing, but that more intense chemistry was on full display after that kiss they shared. Goodness but how these two were great together! But it wasn't just the friendship and romance that was on display. I really liked seeing how they were when it came to the things they were most passionate about--Reese with his work with the babies in the neo-natal unit of the hospital and Erin with her blogging. Speaking of the former, there was one particular event in the book that nearly had me in tears, but I liked how it brought Reese even closer to Erin's family and how it cemented the love and trust they all shared.

One of my favorite things about this book had to do with the fact that it was Reese who was more intent on their pact coming to fruition compared to Erin who was more than content with them being single and "just" best friends. Usually, it's the woman who's been pining for the man for years, and while I wouldn't necessarily label this as "pining", I did feel for Reese, especially when it felt as if he was the one who was way more invested in a non-platonic future together. Kudos to the supporting cast of characters, particularly Reese's family, Erin's sister and brother-in-law, and Reese's and Erin's best friends. Overall, Save the Date was a sweet and sexy read, one that turned out to be a favorite that helped make this weekend ever more relaxing and enjoyable. It garners five stars. ♥

Purchase Save the Date on Amazon.