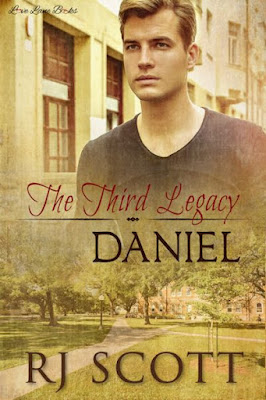 
About Daniel
Daniel worked hard at college, using coping strategies to shut himself off from any situation that might hurt. But, persistent nightmares and fears for his future drive him to revisit the past. Now Legacy might be the only place to give him a chance at peace.

After the tragic loss of his parents, Corey is head of the family now, and the welfare of his three younger sisters are what matters the most. Corey is desperate to find Daniel, tell him the truth and somehow convince him to keep secrets. Even if this leads to heartbreak.

When the world crumbles around Corey, and Daniel is running scared, Legacy ranch is their only hope.

A new story set in the world of Jack and Riley Campbell-Hayes and the Double D Ranch, Texas.

Read my five-starred review of Daniel.

An Excerpt from Daniel
Chapter 1

I want to go home.

Daniel Chandler trudged miserably down the long black ribbon of road, tears burning his eyes, and hopelessness tightening his chest. The heat of an August Texas day had subsided to a slightly cooler evening, and the sky was a brilliant mass of stars, but he couldn’t bring himself to look up at them anymore.

How had everything gone this badly wrong? Brett had promised that he would take Daniel somewhere far away from his foster family, but one weird question from an inquisitive cashier at a gas station and Brett had panicked. He’d refused to go any further, and said he was going home.

Daniel didn’t want to go back to San Antonio. He wanted freedom, and the ability to decide for himself where his life was going. He’d overheard his foster parents talking about how he was a liability; that he costed them more than they made, and he knew it was only a matter of time before they got rid of him anyway.

So he refused to leave with Brett and got out of the car.

Brett didn’t care, and he drove away, leaving Daniel stranded.

Daniel kicked a stone, stumbling a little when he misjudged the curve of the road. He’d eaten the cereal bars that Brett had tossed him and used up all the water. Which left him in the heat, without food or drink, and carrying a backpack with limited clothes. He also had books—his favorites, and a wallet which contained nothing more than a couple of hundred dollars he’d saved from his gardening job. The only official thing he had in the bag was his ID.

He’d left his most recent home at six-thirty a.m., with no real idea of where he was going or what he was doing, only knowing he wasn’t going to spend another minute in a house where he wasn’t wanted.

Hunching his shoulders against the weight of his backpack, he carried on. Sometimes he hummed to a song in his head. Other times he counted the steps he took, but most of the time he stared ahead, not counting or humming at all.

A car pulled up alongside him. No, a truck, and at first his heart leaped. Brett was back. He’d changed his mind and returned to help Daniel.

A female voice called out. “Can we give you a lift somewhere?” she asked through the open window.

Daniel saw she wasn’t much older than he was, long blonde hair swept up into a ponytail, her smile wide, her expression kind. A man sat in the driver’s seat, but he was in the shadows, and at first, Daniel couldn’t make out his face until he leaned forward. The first thing Daniel noticed was the dog collar, then the same kindly smile as the girl. They were clearly related, both fair, with light eyes and an angular balance to their features.

“Hello, young man. My daughter and I are heading to Laredo. Would you like us to take you?”

He smiled at Daniel, this man in black with the white collar. This was an average family. They probably thought he was a hitchhiker and were offering genuine help. If Daniel couldn’t trust a man of the cloth traveling with his daughter, then who could he trust? He scanned the road behind him, waiting for Brett to suddenly appear and pick him up, but he was tired, hungry, and verging on desperate.

“Thank you.” Daniel opened the back door. He’d never hitchhiked before, didn’t know what the etiquette was, but he felt like he should offer to pay. “I can cover gas,” he said.

“No need for that,” the dad said and extended a hand awkwardly over the seat, which Daniel shook. “Father Frank Martins and this is my daughter Andrea.”

Andrea glanced back at him and grinned again. “Hey.”

“Daniel,” Daniel replied, as mute as usual around a girl as he was with boys. She turned back to the front, and Frank put the truck in drive.

Daniel did as he was told. Then settled back for the ride.

“Where are you from?” Frank asked after a few moments of silence, filled only with the soft sound of tires on blacktop.

“Really? What brings you this far south?”

Her dad huffed a gentle laugh. “Sorry.” He used the mirror to see Daniel. “You like music?”

Frank fiddled with the stereo. Country music filled the cab, and Frank hummed along. Andrea was on her phone, as evidenced by the glow of light as screens changed, and Daniel regretted leaving his phone at home. In his mad, stupid, anger, he’d wanted no way for his foster parents to keep tabs on him, but right now, he kind of wished he could phone them. He should pluck up the courage and ask Andrea to borrow hers. Maybe give his foster-parents a quick call, apologize, get them to pick him up, or at least arrange a bus.

They would help him. He didn’t doubt that. Even if he’d been an idiot and they wanted to hand him off to the next family, they would never leave a fourteen year old kid stranded miles from home.

“You thirsty?” Frank asked, and before Daniel could answer, Frank had unlocked the glove box and pulled out a bottle of water, passing it back to Daniel.

He took it with grateful thanks and downed a third of it in thirsty gulps. They reached the outskirts of a small town, and the car slowed to a stop outside a cookie-cutter house, a pretty place with manicured lawns.

Andrea turned around to look at Daniel.

“This is where I get out,” she announced. “Nice to meet you, Daniel.”

I thought they were both going on to Laredo?

Frank turned around as well. “I can take you all the way into the city. It’s only another ten minutes or so to the bus station or somewhere like that? A hostel?”

Frank interrupted, “Or you could stay the night here or a motel. We have one a few blocks down from here.”

Andrea shut the door and jogged up to the house, vanishing inside.

“Could I just borrow your phone?” Daniel asked.

Frank smiled, nodded, and pulled out his phone, tutting as he did so. “Oh my, the phone’s dead. You want to use my house phone? Or shall I just get you to the city? The bus station, right? They have public phones there.”

So many decisions. So many difficult choices, he thought and yawned.

Daniel blinked at him. He was tired, and everything felt kind of hazy. “Yeah, home.” Back to his pretend parents and his pretend family, but back to a warm bed.

Daniel did as he was told, his limbs feeling heavy, and his coordination shit. Finally, he was belted in the front, and he closed his eyes briefly, exhaustion washing over him.

The country music got quieter, Frank’s humming was louder, and the journey to the city took a long time, the car swaying, and Daniel’s head thicker, full of softness and a weird kind of peace. He saw fields and signs, but none of them made any sense. Finally, he couldn’t fight the overwhelming lethargy, so he slept.

And woke up in hell. 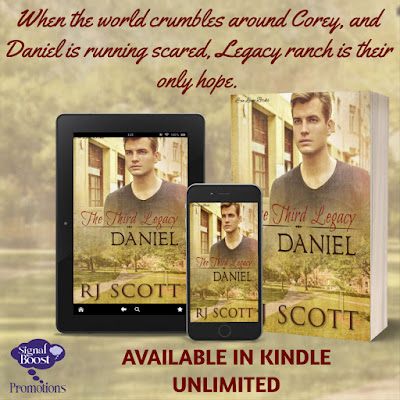 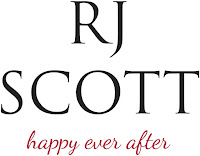 RJ is the author of the over one hundred novels and discovered romance in books at a very young age. She realized that if there wasn’t romance on the page, she could create it in her head, and is a lifelong writer.

She lives and works out of her home in the beautiful English countryside, spends her spare time reading, watching films, and enjoying time with her family.

The last time she had a week’s break from writing she didn’t like it one little bit and has yet to meet a bottle of wine she couldn’t defeat.