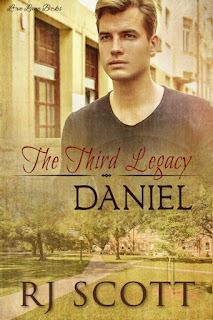 It's been nearly a year since the release of the second book in the Legacy Ranch, but boy, did RJ Scott make the wait worth it because Daniel is the best one in this heartrending yet hopeful series about three young men who were the victims of very bad men when they were at an age where fighting back would have cost them their lives. When twenty-two-year-old Daniel Brown answers the knock on his door, he has no idea who the man before him is; and while twenty-five-year-old Corey Dryden has never met Daniel before, there are certain things he does know about the college senior, starting with his real name: Daniel Chandler. The last thing Daniel wants is to have everything he's worked so hard to keep buried unearthed, especially by this stranger who stirs a combination of emotions he'd rather not analyze too deeply. But maybe the time has come for Daniel to come to terms with his past. In doing so, he'll see certain individuals he thought he'd left behind after the court case that put two men in prison. He'll also have to confront his own mix of feelings for Corey who is tied to his past in the unlikeliest of ways.

I went into this third and what I'm guessing is the final Legacy Ranch book having read the two previous books in the series plus the entire Texas series, and while you could probably read this one as a standalone, I'm going to recommend that you, at the very least, read Kyle and Gabriel as well because the back story involving what happened to these men has elements that all three shared. Basically, reading the other books will provide you with what I believe will be an even better reading experience. With that out of the way, can I just say that RJ Scott knows her way around these series that have a fair amount of angst in them while bringing in elements of love and family into them. In the midst of the darker parts of Daniel's and Corey's individual stories, that feeling of hope comes into play, as do redemption and moving forward. I love that Scott doesn't meander through her stories, choosing to focus on those moments that hold the most value to her main characters, both as individuals and as a couple. I'm giving Daniel five stars and I've got my fingers crossed that we do get updates on them sometime soon! ♥

Read my reviews for the Legacy Ranch series: