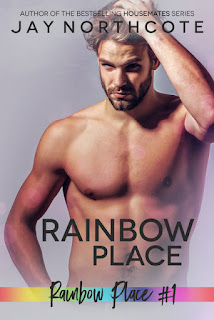 When I learned that Jay Northcote had a new series planned, I knew it had to go on my to-be-read list! I loved his Housemates series--the first book was my introduction to the author's writing!--as well as his newer standalones and re-releases and an audiobook, but when an author whose work I've enjoyed reading launches a new series, it somehow feels like a completely different kind of thrill. It sounds weird, I know, but I love that feeling of familiarity that comes with a series--those commonalities and shared characters, locations, and features that each book has yet every single one is able to stand on its own. If Rainbow Place, which is the first in Northcote's series by the same name, sets the standard, then the rest of this new series is going to be something I'll be looking forward to.

Set in Cornwall, this is the story of thirty-six-year-old Seb Radcliffe, whose moved from London in order to live a quieter life. He hopes to open an LGBT-friendly cafe and bar, and while his two closest friends in the area tell him that it's a good idea, his building contractor seems to think it's one that's destined to fail. But then if thirty-three-year-old Jason Dunn is honest with himself, a place like what Seb has planned was something that would have helped him in his youth--a place where he felt accepted. But living with a father who was homophobic and being in an industry where machismo was almost a requirement are part of why Jason has remained in the closet all this time. He's used to his self-imposed prison, but maybe being with Seb will help him find his place on the rainbow.

I seriously liked this series starter! Seb and Jason may have had a hint of an attraction in the beginning, but this was a story about how they developed a non-relationship into something that was real and very much a relationship the more and more time they spent together. Of course, because Jason wasn't out about his sexuality, there was a lot of secrecy, but this was a journey for him, one that was both about self-acceptance and acceptance from others. This was also the perfect kind of start to a series because it gives readers a standalone love story between Seb and Jason while also introducing Rainbow Place, which I'm guessing will be the place where all paths will cross, as well as a number of memorable side characters. Rainbow Place was a 4.5-starred appealing romance. ♥