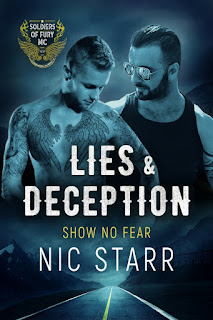 I've read and enjoyed several of Nic Starr's books in the past, and given the opportunity to read the first book in her brand new series was a no-brainer. Lies & Deception is the Soldiers of Fury MC series starter and it's the story of a police detective named Mitch O'Neill who goes undercover in order to infiltrate a notorious motorcycle club. His ex-boyfriend having pledge himself to the club provides Mitch with the perfect cover, but how much help can he really get from his drug addict of an ex? As long as he keeps his head down and doesn't call unwanted attention to himself, Mitch should be good to continue digging into the Soldiers of Fury. But then he meets Finn Cummings whose brother just happens to be the club president. Assigned as Finn's driver, Mitch gets up close and personal with Finn, who has promised himself never to have anything to do with his brother's club. When they start falling for each other, will Finn be able to reconcile himself with the idea that his heart now belongs to someone he told himself he'd never become involved in and will Mitch lose the man he loves when reveals the truth about himself?

I love books that have that air of suspense to them, and let's admit it, there's quite a few out there that share that trait. So, I keep an eye out for those books that keep me on the edge of my seat, making me want to flip from one page to the next to find out how everything is going to play out and if there are any casualties on the way to a happy ending. In the case of this new series starter, I confess that there was a degree of suspension of disbelief on my end. Being an undercover cop joining a club that your ex belongs to was iffy to me, mainly because I've read many MC novels, and if it's one thing that's reiterated time and again, it's that loyalty to the club comes first and foremost. However, I kept reading because I know the author is more than capable of writing a good story, and at the end of the day, I did find myself liking Mitch and Finn and the very complicated circumstances their romance was founded on. While Lies & Deception does end with a happily-ever-after for the couple, I'm really curious as to how the series is going to look going forward, especially given the ending. Four stars, and book two's been TBRed. ♥