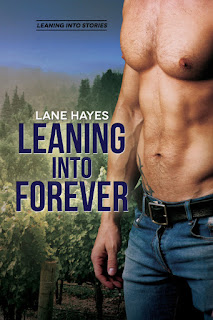 Note: An advanced reader copy was provided by the author via IndiGo Marketing & Design.

“I don't know. Just being you. You're exactly what I need right now, and I-I learned the hard way that it's very important to tell people how much they matter to you while you have the chance. So I'm telling you, Levi, my love...you matter to me.”


Gah! This book! I wish it had come with some sort of tissue warning or a note that it should be read in public because, damn it, I ended up reading it while I was out and I got weepy and now I have a bad cold. I'm totally blaming Lane Hayes for this. Why? Because this Leaning Into series ender (WAAAAAH!) was every bit the bittersweet story I expected it to be and yet it also turned out to be far more than I could have ever hoped for. Geordie de la Rosa's story of finding love after the greatest loss of his life has been a long time coming. Well, okay, not like years, but ever since Geordie was introduced in Leaning Into the Fall, his storied tale demanded to be told, and now that I'm done reading it, I admit, Leaning Into Forever was exactly how this series should come to a close.

It's been nearly four years since Geordie de la Rosa unexpectedly lost the love of his life. Now forty-three, Geordie focuses his attention on the winery he co-owns with his best friend, continuing the legacy of the man he loved. He enjoys the wine tasting and the food pairing as well as breaking into song whenever the hell he felt like it. He's surrounded by the friends he considers family while having regular conversations with his lost love. But Geordie's world is about to start spinning in a complete different direction once he meets thirty-seven-year-old minor league baseball player turned restaurateur Levi Yeager. Geordie isn't someone who necessarily has to be coaxed out of his oh-so-fabulous shell, but what Levi does is even more wondrous; he coaxes dearest Geordie to live and love again.

Saying goodbye to a series that I've adored as much as this one isn't easy, but I couldn't have chosen a better story to end this with. Leaning Into Forever is a second chance love story, but not the kind you think of when you hear "second chance romance". This isn't merely a romance; it actually is a tale of true love, one that comes along a second time around with someone else. But how do you truly let go of the first person you loved in order to be with the last person you may now ever love? My heart broke for Geordie because there was no denying just how much he loved Mike and how he was growing to love Levi. He was Mike's Birdie, but Geordie had to be the one to set himself free in order to once again let his heart fly and then embrace the chance to share it with someone else.

I love how each of the stories told in this series has stood on its own merits, and the same can safely be said with this seventh and final one. Of course, I'm still holding out hope that the author will revisit this amazing cast of characters in the (near) future just so we can see how they're all doing. Heart, heat, and a whole lot of happiness--that's exactly what we get with every single book, but most especially here. Maybe my adoration for Geordie and Levi's story had to do with my shared love for alliteration. Seriously though, I have a lot of love to give for stories like this one; but when it's crafted together as well as Hayes has, well, then it becomes one hell of an extraordinary experience for a reader like me. Leaning Into Forever gets five-plus stars. I seriously recommend the entire series. ♥

Purchase Leaning Into Forever on Amazon.