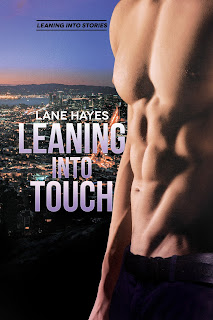 Leaning Into Touch is the fourth book in the Leaning Into collection of stories penned by Lane Hayes, and if you've read the first three in the series, then thirty-two-year-old California-born and -bred Joshua Sheehan and thirty-five-year-old Irishman Finn Gallagher should be familiar to you. Josh is part of the quintet of best friends composed of now happily married Zane Richards and Eric Schuster, Nick Jorgensen, Grant Kostas, and, of course, Josh. Among the five, it's Josh who's feeling the most aimless, especially since his job at the local museum is about to come to an end. Who would have thought, however, that it would be in that very museum on the very last day of his time there that Josh would see, of all people, the man with whom he spent six months with before choosing to end it.

It's been a year since Josh last saw Finn. The connection is still very much there, but even as the two men feel the pull, there seems to be more that tells them the best thing to do would be to push the other away. Maybe they can be friends...just friends...but that's looking telling them to look and not touch. They become a great source of support nonetheless, especially with the unexpected drama going on with Josh's divorced but still friendly parents and with Finn's confusing is-he-or-isn't-he status. With everything going on in their respective lives, the best thing would be for these two men to simply go their respective ways, for Josh to listen to his friends and stay away from Finn. But maybe, the best thing for them is to lean in, grab a hold of one another, and simply listen to their hearts.

Josh and Finn came THIS close to knocking Nick and Wes (Conrad) from the top spot on my list of favorite Lane Hayes couples. Where there relationship would end up was a big question mark for majority of the book, even though it was pretty obvious just how much Josh and Finn cared about each other. The chemistry was there from the moment they met in Leaning Into the Fall, but there was also a reason why Josh's friends were wary of him getting too wrapped up in Finn. There were parts of Josh that I could so relate to, although I found myself equally empathetic and frustrated with how he was handling his father's revelation. I felt that he did a lot of growing up in this book, learning to be more accepting and responsible while realizing that everyone has their own story to tell.

There's no denying that Finn is a complicated man, but I liked how Josh managed to peel off those layers, allowing readers to get to know the kind of man Finn actually was--a version of himself only a rarefied few got to see and experience. I was certainly surprised by some of the secrets he shared, but when those did come to light, I had a better understanding of why he was the way he was. He and Josh may not have seemed like the "perfect" pair, but they were perfect for each other, with both their lives works in progress as they continued to find their footing in their own lives as much as in one another's. I've only read two out of the four series Lane Hayes has come out with, but I'm considering Leaning Into my favorite (so far!), and I'm giving Leaning Into Touch five out of five stars. ♥

Leaning Into the Fall (book three) - five-plus stars - My Review

Purchase Leaning Into Touch on Amazon.