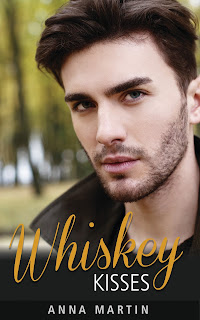 Whiskey Kisses is a novella by Anna Martin that's set in Kilglass, Ireland, which is where the whiskey distillery owned by twenty-seven-year-old James O'Shaughnessy's family. When he left the small town he considered home at eighteen, he thought his future lay in the big city. Tough times have sent him back home, but Jim is making the most of the turn of events. He has a home of his own, a steady income, and a family that loves him. His sexuality, however, remains under wraps. In a town like Kilglass, coming out as gay would open him up to scrutiny and judgment. Nothing's even made him want to come out. And then Aiden Rooney comes to town. The thirty-two-year-old artist seems as taken with Jim as Jim is with him. The more time they spend together, the more they fall for each other, but at the same time, the whispers grow louder. Will Jim listen to the judgment or to his own heart?

I've quite enjoyed the Anna Martin books (plus one audiobook!) that I've read (and listened to!) so far, and Whiskey Kisses certainly doesn't disappoint. It's a really quick read--I finished the whole thing in less than half an hour's time--and while it's not packed with a whole lot of detail, it does tell a pretty complete story, one with a hopeful ending. Living in a highly conservative town that looks upon anyone who isn't straight as some sort of affront to the rest of the residents isn't something new, but I liked how Martin chose to tell her story. There wasn't a whole lot of outward homophobia, but what was shown was sufficient enough to get an idea of what Jim and Aiden were going to face should they choose to continue on with their relationship. Oftentimes sweet but never overly so, Whiskey Kisses was a novella about living your own truth and then taking a chance on love. Four stars. ♥