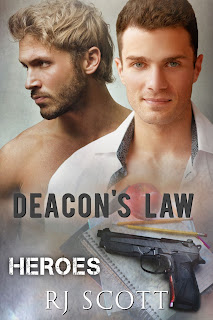 Deacon's Law is the newest addition to RJ Scott's action suspense series, Heroes, and if you're familiar with the series, then thirty-five-year-old retired cop Deacon Shepherd should be a familiar name. He had just completed an undercover assignment in book two, and now find out what that assignment entailed. It was while undercover three years ago that Deacon met Rafe Ramirez who was in the wrong place at the wrong time. Deacon knew that he had to protect Rafe from the evil doings of his uncle and cousins while making sure that his cover remained intact. Rafe, however, knows only thing--Deacon was the man who both kissed him senseless and tried to kill him. Now twenty-six and with a new identity, Rafe is living a good life, and Deacon tries to keep tabs on him as best he can. When he learns that Rafe's the victim of a hit and run and the suspect is someone from both their pasts, Deacon is intent to go all in so he can make sure Rafe is safe--even if it means enduring the hatred of the man he fell in love with three years prior. Can Rafe entrust his life and heart in the hands of the man who changed his life?

Just like with the first book in the series, this latest one had a second chance romance feel to it but while there wasn't much love lost between one of the main characters in book one and I, I quite liked Deacon and Rafe. Deacon didn't really have much of a choice when he shot Rafe three years ago, and I also fully understood Rafe's absolute mistrust of this man he believed was a good guy before he was shot by him. I enjoyed seeing their relationship establish itself once again. Deacon had to earn Rafe's trust and Rafe had to make sure that this wasn't going to end up costing him. While there's no question who it is that's after Rafe, the suspense element was clear and present throughout, especially since you can't help but wonder when and where the villain is going to show up. There are familiar faces and a new character that's introduced, which gives me hope that this third book doesn't mark the end to the series (though the new character is also connected to Sanctuary, a security group which has its own series, one that I have yet to read). Exciting and entertaining, I'm giving Deacon's Law 4.5 stars. ♥