Review: A Reason to Stay by RJ Scott (Heroes #1) 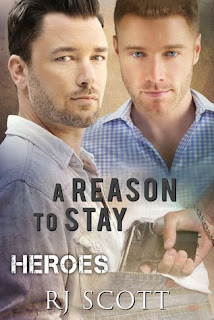 A Reason to Stay is the first book in RJ Scott's Heroes series and it's a second chance romance between Navy SEAL Viktor Zavodny and cop turned sheriff's deputy Lieutenant Aiden Coleman. When Viktor was eighteen and Aiden was sixteen, they had a non-relationship that felt like a relationship, but Viktor couldn't deal with the sweet innocence and idealistic dreams of the younger man, so leaving their hometown behind to join the navy became even more imperative. Twelve years later, their paths cross and while Aiden's naivete is long gone, Viktor knows all too well that the new deputy sheriff has "forever" in mind, something that Viktor's never seen for himself. It takes an additional two years before they see one another again, and this time, Aiden has vowed to steel his heart against the temptation that Viktor continues to be. Their lone focus right now is to find out what happened to Viktor's only nephew. They need answers, but they have different ways of getting them. They can't seem to stand being in each other's presence, but it also calls to them. When all is said and done, will Viktor stay or go yet again?

I was NOT a fan of Viktor's for majority of this book, and based on the reviews I've perused, it seems I'm not the only one who didn't like him much. I know he gave his reasons for why he always left and why he treated Aiden the way he did, but the lack of remorse made it difficult for me to even consider the guy as worthy of someone like Aiden. But shockingly, he won me over. His love for his family may not have been the overtly touchy-feely kind, but he did, indeed, love them, and his particular affection for his nephew definitely earned him bonus points. On the other hand, I really liked Aiden, although there were countless times I was sorely tempted to shake him so he could see sense and realize that he deserved better. But you know what they say: the heart wants what it wants. While I had a misgiving or two about the love story, I liked the action suspense part of the book, which certainly amped the overall excitement level of the story. A Reason to Stay was a good beginning to the Heroes series, and it introduced the main character for the next Heroes book rather nicely--subtly yet markedly. This one gets four stars. ♥

Purchase A Reason to Stay on Amazon | B&N | iBooks | Kobo.