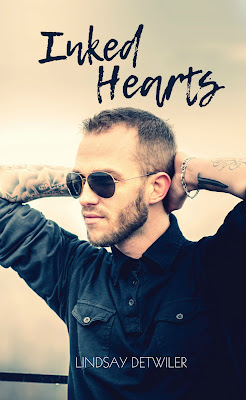 About Inked Hearts
“Six years, a complex about my freckles, a love for pastrami, and a fear of failure.
That’s what he gave me before slaughtering my heart and my faith in men.”

Suffering from the sting of betrayal, twenty-eight-year-old Avery Johannas quits her job and moves hundreds of miles away to Ocean City, the beach town of her dreams. With the help of her zany roommate, Jodie, Avery finds a new career, home, and freedom. Throughout her self-exploration, she makes only one rule: She won’t give her heart to a man again. She’s living for herself this time.

But then she meets Jesse.

A tattoo shop owner, the green-eyed Jesse Pearce is wild with a touch of mystery. As Jesse and Avery explore Ocean City and their friendship, they’ll have a hard time drawing a line in the sand between their hearts.

When summer nights get a little more heated than either expected, they’ll have to ask themselves: Can they let go of their notions of love, or will their hearts be permanently inked by past pain? 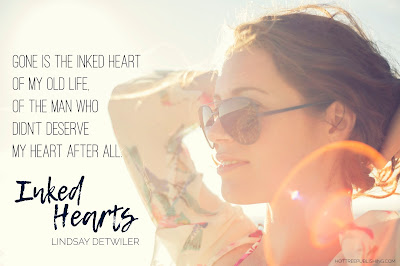 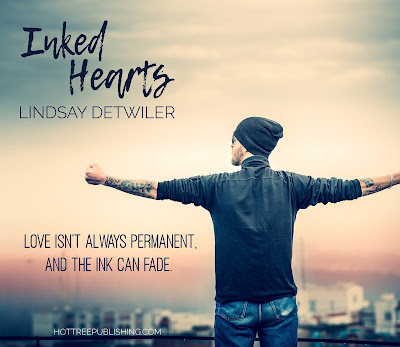 An Excerpt from Inked Hearts
There’s some soft rock music playing when I open the door to Jesse’s apartment. The distinct smell of teriyaki sauce permeates the room, dancing in my nose as soon as I walk through the door.

“Hey. That looks amazing on you,” he says. He’s wearing black jeans and a button-up shirt. He’s gelled his hair, and hints of his cologne permeate the room.

“So you do this for all of them?” I ask, setting down my bag on the counter.

“Only the good ones.”

He leans in to kiss me, and I realize how natural this has become. It hasn’t taken long for us to settle into couple status. In retrospect, it seems now like it was always coming. It seems unnatural for us not to be like this—comfortable, kissing, and together.

I’m so glad that for once in my life, I broke my own rules.

Jesse leads me to his kitchen table, which is adorned with a dozen pink roses. I smile, gently touching the petals of one.

“This is beautiful. Thank you.”

“Have a seat. Dinner is ready.” Jesse brings out a few casserole dishes with rice, teriyaki chicken and vegetables, and even some egg rolls.

“Did you make all this?” I ask coyly, pretending to be impressed.

“Yeah, it was sort of rough because I’m not that great at cooking.”

He stares for a moment as he sets the dishes down. I can tell he’s trying to see if I believe him.

I look directly from him to the top of the refrigerator, at a large take-out bag with a familiar Chinese restaurant’s name. I raise an eyebrow.

“Yeah, okay. I just have a feeling this is going to taste just like it.”

“Only because I worked so hard to get the secret recipe.”

I dig into the dishes, serving myself, laughing at the trouble he went through. “You know, you didn’t have to dirty dishes on my account. I would’ve been fine with takeout. I’m not a food snob.”

“That’s a good thing, because I’m not much of a cook.”

“Oh, and I am,” I say, referring to the pasta debacle.

“I’ll drink to that,” he says, holding up his bottle of beer. We clink bottles as we finish eating. To an outsider, I’m sure it looks ridiculous. My fancy dress and necklace, sitting at a table eating take-out Chinese food.

To me, though, it’s perfect. The man I’ve fallen for sitting beside me, Chinese food, and a comfort I haven’t had with anyone else.

As much of a mystery as Jesse Pearce was a few months ago, he’s become as familiar as my new self.

So when we finish eating and he gives me the look I’ve come to recognize, I lean forward, kissing him with a fervor I’ve reserved for this moment, telling him wordlessly that I’m all his.

As he leads me back to the bedroom and hastily unzips the dress he painstakingly picked out for me, I smile.

But as Jesse’s hands travel down to the familiar hot-pink underwear I’m wearing, I feel myself let go of all of those ideas I had before.

I’ve come to realize it’s okay to be his, because Jesse doesn’t hold me back. He makes me who I want to be. He makes me the best version of myself.

Loving him might be a risk, and losing myself completely to him tonight might be my undoing. Letting him go, though, is not an option, not when he tosses me back on the bed, and I feel every part of my being succumb to the tattooed hunk moving perfectly on top of me.

And so, after a night of learning what adult sleepovers are actually all about and mastering the sex-hair look, I let go of my rule. 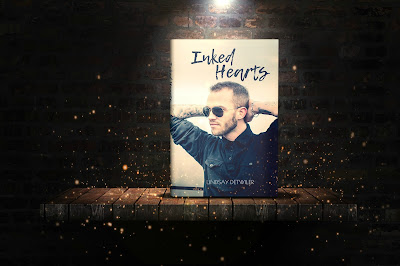 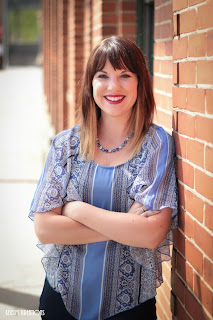 An English teacher, an author, and a fan of anything pink and/or glittery, Lindsay's the English teacher cliché; she loves cats, reading, Shakespeare, and Poe.

She currently lives in her hometown with her husband, Chad (her junior high sweetheart); their cats, Arya, Amelia, Alice, Marjorie, and Bob; and their mastiff, Henry.

Lindsay's goal with her writing is to show the power of love and the beauty of life while also instilling a true sense of realism in her work. Some reviewers have noted that her books are not the “typical romance.” With her novels coming from a place of honesty, Lindsay examines the difficult questions, looks at the tough emotions, and paints the pictures that are sometimes difficult to look at. She wants her fiction to resonate with readers as realistic, poetic, and powerful. Lindsay wants women readers to be able to say, “I see myself in that novel.” She wants to speak to the modern woman’s experience while also bringing a twist of something new and exciting. Her aim is for readers to say, “That could happen,” or “I feel like the characters are real.” That’s how she knows she's done her job.

Lindsay's hope is that by becoming a published author, she can inspire some of her students and other aspiring writers to pursue their own passions. She wants them to see that any dream can be attained and publishing a novel isn’t out of the realm of possibility.